The real wedding we have to share with you today is a pretty cool one, it's glitzy, it's glamorous, it's stylish and it's fun.

And it's also stacked to the (black chandelier clad) rafters with unique ideas that fans of punchy style or gold sparkle will love.

Sandra & David got married with a traditional Armenian ceremony, then shook things up with a warehouse reception at The Washbow in Culver City, L.A.

And it's that unique wedding reception that we're sharing with you today, with its flowing cocktails, neon lights, luxe florals, sequin linens, geometric details and preppy stripes.

All that sounding like a bit of a clash? Not when Natalie and her team at A Good Affair Wedding & Event Production  wereon hand to design something truly gorgeous.

Captured by Aaron Young Photography, scroll down to be inspired by this fabulous bash, and read more about it, with tips and insights from Sandra, David and Natalie.

Technically David and Sandra met on a youth pilgrimage to Armenia to celebrate the 1700th anniversary of Christianity in that country back in 2001.

There was a group of about 100 kids, Sandra was new to the group and didn't know many people while David was plenty of friends in the group. He claims he remembers Sandra but she doesn't think he really remembers her.

In 2011, Sandra moved back to California where her cousin, Sarah, had been working for David. Sarah thought of David as her mentor and had spoken so highly of him. Sarah set Sandra and David up and a few years later came the proposal.

David proposed to Sandra on the Jimmy Kimmel Show.

Sandra and David had a traditional Armenian ceremony.

It was important for them to include a special quote by Maya Angelou that truly described their love for eachother:

After the wedding, Sandra and David honeymooned in Maui. They stayed at the Andaz Maui at Wailea Resort.

Originally, Sandra was against going on “another beach vacation”. But she really underestimated how tired they were going to be after hosting a wedding weekend that she welcomed a trip where “you'll have to make minimal decisions”.

They definitely recommend going on a trip right after the wedding: You're at the peak of your happiness and you get to extend the fun and festivities of the weekend!

Sandra and David choose Aaron Young to capture their day because he was down to earth and they knew he would bring out the best in them.

They are not a couple that takes a lot of photos and so it was important for them to choose someone they felt very comfortable around. They loved his style and the over quality of photos.

He also offered them an alternative to a photo booth. Sandra and David both knew they wanted some entertainment for their guests but didn't want just another photo booth.

Aaron offered them what he calls a marvellous light. It is an open photo booth lounge that allowed guests to take fun photos and then download later. It was a happy medium to not having a traditional photo booth.

Sandra and David chose Atomic Tangerine Film Co. because they wanted something that was a little funkier and more upbeat rather than a traditional wedding video. They didn't want something long and sappy.

They also loved that they got to pick off five songs that they liked and Atomic Tangerine created a video around one of the chosen songs so it felt more personal to them.

Later when the video was ready, they showed the older generation who were surprised to find out they even had videographers! They were perfect for the occasion.

For dinner, they had stations of wonderful food by Urban Palate. Both Sandra and David are true foodies. They wanted to ensure the food reflected some of their favorite dishes.

They had contemporary takes on their traditional Armenian favorites as well as some barbeque to showcase Sandra's time in Austin.

David isn't a fan of cake. Instead they had ice cream sandwiches from Coolhaus and a wonderful dessert selection from Urban Palate.

Sandra and David had a lot of out of towners for their wedding.

They hosted drinks the night before the wedding and an after wedding brunch to give them more time to see all their guests who came from so far away to celebrate with them.

For Sandra, it was running into their grand entrance to the song “It Takes Two”. Sandra and David ran in from different sides and got everyone riled up which really set the tone for the evening.

For David, it was when the priest said today was a miracle. Possibly because David was actually getting married.

Sandra and David love speakeasies so for them, the venue really helped to make their wedding “so them”. When guests arrived, they walked up to a cold warehouse on the outside, only to find a beautiful, magical, garden oasis behind big gates.

The attention to detail in each decorative element choice had a lot of thought put into it. Everything from the paper goods, to the table settings, to the dance floor, and to the bar evoked Sandra and David's personalities.

Their favorite part was the neon sign that really tied in the whole area.

For Sandra and David's first dance, they started with “Careless Whisper” by George Michael and then the DJ mixed into “Mas Que Nada” by Sergio Mendes/Black Eyed Peas to bring in some fun Latin dancing that Sandra loves.

Sandra loved the fact that the venue offered a sleek blank slate so she could dress it up how she wanted to.

It was also in a great location – Sandra and David both liked that it was in Culver City and their guests could enjoy the surrounding area.

We knew we wanted a unique wedding filled with interesting details but didn't know how to do that so we hired Natalie Good, owner of A Good Affair for Wedding & Event Production to create an unique environment the guests would never forget.

Sandra and David had a large guest count but they really did not want boring round tables. To create a unique space I created a 30′ X shaped table as the focal point of the room as well as tall bar height dining tables to elevate the design.

Black crystal chandeliers made a bold statement hanging from the exposed beams at The Washbow.

We also created a custom gold fringe wall as the couple's backdrop and a fringe installation over the bar. A custom neon sign really added some wow to the space too.

Black sequin linens gave a touch of glam that worked beautifully with the bold florals.”

Overall – Be organized. Determine a budget, then determine who you're going to invite. Your budget will highly revolve around how many people you're inviting.

Prioritize what's important for the wedding and don't limit yourself. For Sandra, she preferred to have great cocktails over a great dress.

While Sandra was browsing blogs for venues, she kept her options open and ended up coming across what would be her wedding dress. Sometimes you never know where you'll find things!

Sandra created a mood board that helped her identify the things she really liked. After months of collecting photos, she realized she had a pattern and you could really tell what she was drawn to.

Another big tip, keeping the lines of communication open with your partner and those heavily involved is very important.

Just go with the flow – there will be hiccups and disagreements and family drama, take a deep breath and realize you're planning a party at the end of the day.

Pretty sparkling, right? I love the unusual table plan, and the palette is so unique as well – we rarely see black used this much for weddings, but it really works in the large open space.

Did you watch their proposal video too – so cool!

Thanks so much to Aaron Young Photography, A Good Affair Wedding and Event Production, and of course Sandra & David for sharing their gorgeous wedding reception with us. 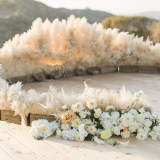 next up
Trend Alert: 23 Gorgeous Ways To Use Pampas Grass for Your Wedding