There tends to be a bit of a formula when it comes to the format of a wedding film, so when we see something a little bit different, it tends to catch our eye.

And Isabelle and Simon’s destination wedding film, by Loud Cinematography, is not only unusual, it’s also romantic, stylish and so enchanting.

It’s one of those beautiful films that, even though we don’t know the couple, we’re immediately taken to their dreamy Ibiza wedding. We’re invested, we’re captivated, and we’re wishing we were one of those 40 lucky guests, dressed in white and overlooking the Mediterranean.

Scroll down to hit play on this romantic film, but first up, Sascha from Loud Cinematography shares the story of why this Swiss couple chose to get married on the Spanish island of Ibiza…

Both Isabelle and Simon, have loved this island for years and have often been here (two to three times a year) with friends.

Then there was this idea to celebrate in the warmth and in this magical atmosphere.

They both found what they were looking for here: a casual, easy, relaxed, beach, holiday-style, hippie, boho feel.

And above all there was Jean Michel (the guru of their ceremony), who is also from Switzerland and has lived here for a long period of time. When they met him, Isabelle said, it was clear for them: ‘Here and with him.’

By the sea from LOUD on Vimeo.

So romantic, Isabelle is such a stunning bride, and their ceremony looks so special, doesn’t it?

Thanks so much to Loud Cinematography, and of course Isabelle & Simon for sharing their enchanting wedding film with us. 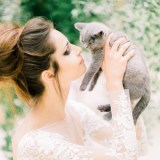 next up
Kittens, Feathers & Foliage Wedding Inspiration (This is pretty freaking cute!)