By A Spanish Do

Hola! Lauren and Elaine here, from A Spanish Do. We’re lucky enough to be planners of destination weddings in beautiful Barcelona and were delighted to team up with Bridal Musings this Barcelona Bridal Week to give you the breakdown of the truly out-of-this-world Yolan Cris show.

As you may know, YolanCris are Yolanda and Cristina, bridal designers from Sabadell, near Barcelona. They’ve been designing since 2005 but have really exploded over the last few years as celebrities such as Lady Gaga, Beyoncé and Shakira have donned their designs. The company has always been based in Barcelona, and to this day they use local fabrics and craftsmanship in all of their gowns. The title of their show this fashion week, #Identity, was a declaration of intentions – an ode to the essence of the brand, leaving no doubt about their origins and their focus.

The scene was already very well set as we awaited the beginning of the show. It was held open air on one of the most emblematic streets in the whole of Barcelona, with the lit up ‘magic fountain’ of Montjuic and the palace of the National Museum of Catalonia in the background. The runway was in the form of a measuring tape, and an industrially sized crane behind the press stand had everyone whispering about what might be in store.

We soon found out – the show began in a burst of modern choreography, culminating in a giant pair of scissors whizzing high over our heads and being lowered onto the runway. The surprises continued during the whole show with models being transported in a jumbo thimble, and dancers suspended over the audience on a huge pincushion!

In true YolanCris style, the designs were no less dramatic than the staging. We loved the fact that they managed to incorporate up to the minute trends – capes, hoods, asymmetric hemlines, jumpsuits – while still staying true to their roots. Their signature intricate lacework was ever present, from boho Chantilly lace to more structured geometric bands, and they also experimented with new fabrics and volumes. Some of the gowns were instantly wearable and others most certainly for fashion-forward brides only. We certainly hope to see some of our 2019 brides try them out!

The theme of female empowerment and freedom of expression was dominant throughout and felt incredibly meaningful in the current climate both nationally and internationally. The designers took us on a tour of fierce female fashion icons throughout the decades, with creations inspired by characters as diverse as Coco Chanel, Grace Jones and Simone de Beauvoir. The 70s, 80s and 90s inspired pieces were some of our favourites.

The event was not just a fashion show, but a 360º experience from start to finish. Well done to the whole YolanCris team on such a masterpiece! 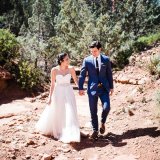 Lauren & Elaine
Writer
Destination wedding planners in beautiful Barcelona, Lauren and Elaine are lovers of food, wine, sunshine and all of the other perks of living in the Mediterranean.
Tags