How Long Do People Date Before Getting Married? We Found Out.

You've been dating your partner for a while and are considering tying the knot – beautiful news! But you're understandably nervous and wondering if it's the right time. We've explored previously how long you should wait to propose according to research and the experts. But how long do people date before getting married in reality? We genuinely weren't sure, and though there is some existing research, it was slightly dated – so we decided to find out ourselves.

How long do people date before getting married, according to our research?

We jumped online and asked over 2000 people how long they dated before getting engaged, and these are the results:

Factors to bear in mind

Now, there’s a couple of important caveats to bear in mind here when digesting these results.

The question was posed on social media, and given various social media platforms' limitations, we could only ask one question. Bearing that in mind, we chose to ask how long couples waited before getting engaged rather than married. Why? Because we felt that asking when a couple got married would have skewed the results as people wait considerably different amounts of time engaged before actually tying the knot – that’s for another poll! Whereas asking how long couples waited before getting engaged, at least gave a solid indication of a couple's willingness to get married.

Due to the one-question limitation, we couldn’t confirm the exact age of the couples who responded. It’s safe to assume that couples who were much younger would have waited longer before getting engaged, whereas older couples might have been less hesitant.

Whilst the vast majority of our social media following is US based, we do have followers from overseas and there’s no question, some countries have a shorter dating length time culturally before getting tying the knot.

Those caveats aside, we still feel the data gives an accurate depiction of how long couples are waiting nowadays before committing to marriage.

How long do people date before getting married, according to existing research?

Our research lines up with data from an e-Harmony study in 2018 that found that “American couples aged 25 to 34 knew each other for an average of six and a half years before marrying, compared with an average of five years for all other age groups.”

What does the research tell us?

Despite the ease of which couples are able to date nowadays thanks to the rise of online dating and apps, when it comes to serious lifelong relationships, the research shows couples are taking their time – and perhaps, rightfully so, according to experts & research on how long couples should wait before getting engaged to reduce the changes of divorce.

So, what does this mean for you?

If you've taken your time and you’re part of the majority that have waited over three years, or even five, don’t stress. It takes most couples time to decide whether they want to spend the rest of their lives together and there’s nothing wrong with that. Trust us, when you find the right person, you’ll know it and taking your sweet time with your engagement won’t change that. My hubby waited over 10 years! :) 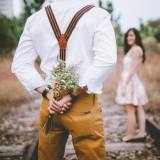 next up
How Soon Is Too Soon To Propose? Here's What The Data Says.