I can't think of a better way to start a brand new, beautiful week than with Dylan and Gen's music themed, rustic chic farm wedding in South Africa.

It's Epic with a capital E.

Here's just a few reasons why:

~ An intricate, vinyl cut, unique aisle runner with the lyrics to a meaningful song (find out more below from the groom)

~ The beautiful, elegant bride with the biggest and best smile ever

~ A random appearance by the resident farm cat during the ceremony

Music is a big part of both of our lives and when thinking about how to inject our personalities (both individually and as a couple) into the decor, it was the first thing that seemed obvious and natural. One of the reasons we moved to the UK from South Africa was to get to see all our favourite artists live and spend a lot of our free time going to gigs.

(Dylan's sister is an artist ~ she created the hanging chinese lantern pendants for the ceremony and came up with the genius vinyl cut aisle runner idea which their friend then designed and made for them ~ what a creative bunch!)

I have played one instrument or another since I was 7, starting with piano, then drums, and for the last 16 years the guitar (and played in bands in my youth). One of my groomsmen, Andy Lund, is a well known South African musician who I played in a band with years ago,  and he performed for our guests in the boathouse while we were having our portraits done.

In fact, all of my groomsmen play an instrument, hence the “guitar volume knob” boutineer pins we made; mine went up to 11 though :)

The lyrics on the vinyl cut we had made for the aisle are from one of my favourite songs of all time, “Everlong” by the Foo Fighters. They summed up exactly how I felt in that moment when I was waiting to marry Gen.

The sheet music we used for the confetti cones we got from a 2nd hand store in Cape Town, in cool old yellowed and moth-bitten piano tuition books with teachers' notes in pencil. But they were super cheap and really authentic.

Gen shares the music they used:

~ Processional: More Than Letters by Benjamin Francis Leftwich
~ Reading: Love Song by The Cure
~ Recessional: Home by Edward Sharpe and the Magnetic Zeros
~ Reception arrival: I Believe in a Thing Called Love by The Darkness
~ Wedding Dance: Something's Got A Hold on Me by Etta James – we did a special swing number, so much fun!
~ First dance: St Croix by Family of the Year
~ Father/Daughter Dance: Tiny Dancer by Elton John

I told you. Off the charts. And isn't that aisle runner positively inspired?!

Come back tomorrow for Part 2 ~ you are going to love how Dylan and Gen decorated their beautiful, rustic, farm venue! 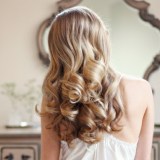