Of course you do. A wedding in the middle of Death Valley with the cutest pup ring bearer and a retro red VW campervan is not easy to forget!

Well, as I was putting Kat and Lovine's real wedding posts together, I discovered their sweet and very unique proposal story . It touched my heart and made me smile from ear to ear. I think it will brighten up your day too!

It's a tale of long distance love, flying pets, a mid air serenade and Real Love.

So here it is, in Lovine's words (and a few of mine thrown in to help tell the story).

Southwest Airlines has been instrumental in sustaining our relationship. In the years Kat and I have been together, we've racked up so many flights from Oakland to Burbank (USA). And when they started to allow pets on board a few years ago, it enabled the 3 of us to safely and conveniently explore the northern and southern golden coasts.

I knew this would be the perfect scenario.

I wanted to magically show up on the same flight that Kat was on, on the way to Burbank.

And so I took an early afternoon flight out of Burbank, to land into Oakland. To catch another flight a few hours later to go back to Burbank, the same flight Kat was on. Without her knowing.

There were some issues in Burbank that almost derailed my entire plan (I missed my original flight preparing for this, and all flights to Oakland the rest of the day were full, with 10+ passengers on standby!), but with the help of the Southwest team, they pulled me through at the last possible moment.

I owe these guys more than I can ever imagine. I literally cried and hugged the supervisor!

And ran like a bat out of hell to the waiting plane.

The lady at the gate asked, “Paul Lovine Gopez. What makes you so special?”

I take the last seat on the plane (which happened to be at the very last row between 300 lb gentlemen – not that I am complaining, I just thought it was hilarious).

I had more challenges making sure that Kat wouldn't see me at the departure gate of Flight 2363.

Again, the Southwest crew took me under their wing and totally helped me sneak out of her view into the last rows of the plane. They blocked off the entire row for me, and gave me quick status updates: “Your girlfriend…. is knocked out”.

I pictured Kat slumped on her chair, mouth wide open. True enough. On Aisle 5, there she was.

I knew then that I was on the home stretch.

After so many hurdles to get on this special flight. This was it.

Lovine created flyers with the lyrics to their special song,  ‘Real Love' by The Beatles (which Kat and Lovine included in their wedding ceremony too) and he used an illustration that Kat had made previously on the front cover.

Then he and the crew handed them out to the passengers (unbeknownst to Kat who was fast asleep).

Kat awoke, dazed and confused to the sound of Lovine singing their special song…

Seems that all I really was doing
was waiting for love…

It's real love
Yes, it's real!

After the intial confusion, a huge smile spread across Kat's face and then another secret passenger was revealed ~ Nickle. Who just so happened to have a ring attached to his cute airline steward pillbox hat!

Lovine got down on one knee and asked,

Will you marry me?

This is what Lovine wrote on his blog, after sharing his story and these photos (which were taken by a fellow passenger):

I have so many things to be thankful for today, and overwhelming gratitude to everyone who helped me get on board Flight 2363 (undetected).

The most blessed thanks, of course, to my wonderful fiancee for saying yes.

Awwwww! How special and beautiful is that?!!

Thanks to Kat and Lovine for allowing me to share a glimpse into their love story. If you'd like to see their intimate desert wedding, check out Part 1 ~ the beautiful photos and you really mustn't miss their wedding film by Modern 8 Films. It's EPIC.

Last I heard newly married Kat, Lovine and their faithful sidekick, Nickle, were on a honeymoon road trip headed to Alaska in their red campervan. What an amazing, free spirited couple. Wishing you guys all the best! 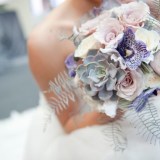