The Journey ~ A Unique Proposal Film in New York

When Michael of Michael Justin Films sends me a film, I know I’m about to see something beautiful.

But this proposal film is not simply beautiful ~ it’s epic.

The amount of thought, effort and technical wizardry involved in making this proposal happen is mind blowing.

Ryan proposed to Natalie by sending her on a journey through Manhattan, New York and ending in a backyard at a beautiful private home in Westchester County.

Watch their proposal story unfold in snippets of real time and from different angles and perspectives. Yep, this is one unique proposal and film!

How amazing is that?

I love that Ryan was so thoughtful and ensured Natalie was looking and feeling her best before the big moment.

(Men, take note ~ this is an essential requirement for proposals caught on camera / film!)

If you’d like to know more about the production and incredible team behind the film, you can read all about it on Michael Justin Films blog.

Michael Justin Films are based in New York but are available to travel worldwide. 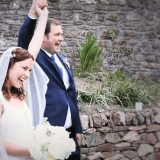