So Catherine & William are having two wedding cakes…lucky guests!

{Yes, I’m referring to Miss Middleton as Catherine from now on as I know the annoyance of people shortening your name… ‘Liz’ makes me shudder!}

The main cake is a traditional yet modern, cream and white, multi tiered fruit cake designed and created by Fiona Cairns and her team, with each tier decorated in a different style.

Here are a few of Fiona’s gorgeous creations, she also works with Waitrose, so you too could have a cake like the Royal couple!

There will also be a special, unbaked, dark chocolate, Rich Tea biscuit cake based on a childhood favourite recipe of the Prince’s by McVities!

Fun fact: McVitie & Price actually made the Royal Wedding cake in 1947 for our very own Princess Elizabeth and Lieutenant Philip Mountbatten which makes the choice even more nostalgic, personal and fun!

If you’d like to have a go at making your own Rich Tea biscuit chocolate cake here’s a recipe via She Simmers-looks yummy, doesn’t it?!

{Image via She Simmers }

It’s actually quite an American move by the couple as often grooms in the US have their own cakes. Maybe we’ll start to see more British men taking an interest in the choice and design of wedding cakes!

I found the official video about the traditional Royal Wedding cake fascinating. Here is the interview with Fiona Cairns and her team, just in case you missed it:

I think it’s wonderful that each sugar flower on the cake will be symbolic, representing the different countries of the UK by including the English rose, Welsh daffodil, Irish shamrock and Scottish thistle. I also love that Catherine wanted to incorporate the traditional Language of Flowers such as roses symbolising happiness and oaks/acons symbolising strength and endurance.

Isn’t that just so lovely?

So from the sneak peeks and snippets of information, if you were a Royal Wedding guest {or maybe you are?!} which cake would you go for?! 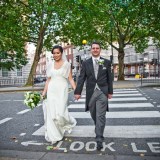 next up
Classic, Elegant & Oh So Glamourous London Wedding {Part 1}