It’s always a great day here at Bridal Musings HQ when we get to share a real wedding.

It’s such a big, beautiful honour to feature a glimpse into a loved up couple’s special day, as well as having the opportunity to showcase the talented vendors who helped make their day so special.

What’s even better is when we get to share both their wedding photos and film!*

And, thanks to Tomasz Wagner Photography and Films, that’s just what we’re doing today. Hurrah!

And all captured to emotive perfection by Tomasz Wagner.

Mandy of M Events shares a little about Jotie and Lucas’ wedding:

Jotie and Lucas were excited and looking forward to starting their lives together. However, they were not as excited about all the work it took to plan a wedding. A year after Lucas proposed Jotie contacted me and said, “alright, we are so ready to plan this thing.” Two months later, a glowing Jotie walked down the aisle in a stunning off the shoulder lace gown.

The couple wanted the wedding to reflect their love and their own uniqueness all while honouring their friends, families and traditions. Lucas’ family and friends were going to join him from all across Canada, with guests flying in from the Yukon, Toronto, Edmonton and Ottawa. Jotie’s South Asian family was quite large. Both her older sisters had more traditional Indian weddings, with very very long guest lists – this made bringing the total list down to 150 people a daunting task.

Although not a traditional Indian wedding, Jotie very much wanted to honour her heritage. Two days prior to the wedding, a Maiya ceremony was held at a banquet hall. Jotie and Lucas sat together with a Rangoli pattern at their feet, customized to create their wedding logo, a bike, which represented their fun loving spirit. Friends and family then took turns to rub Vatna, a traditional skin purifier made with turmeric to help beautify the couple.

Jotie and Lucas’s family played a very important role in the wedding – Lucas’ family all walked in together as he assumed his position for the ceremony. Jotie’s niece, in a beautiful tulle dress served as the flower girl, her nephew the ring bearer. Together her parents walked her down the aisle. Post ceremony, each set of parents adorned the couple in fresh flower garlands.

Words Jotie and Lucas used to describe the wedding of their dreams were vintage, rustic, romantic and intimate. Lots of drapery, candles, mason jars, burlap and baby’s breath were used to create this feel. A custom built wall was placed in the foyer to showcase pictures of Jotie and Lucas growing up, their families as well as their engagement portraits shot by Tomasz Wagner.

The reception immediately followed the wedding. Appetizers and dinner consisted of traditional Indian fare, with enough pakoras and butter chicken to feed an army. Sugary treats came in the form of cake, ice cream and gulab jamun. Shelving matching the wedding decor was full of candy just in case the deserts weren’t enough. The menu served as perfect fuel for keeping the dance floor packed. Bhangra tracks switched up with western music which kept the guests and couple dancing all night long.

So beautiful.  It’s hard to believe it was planned in just two months!

Stay tuned as Jotie and Lucas’ wedding film will be coming to your screens later today and trust us, it’s worth the wait.

*If you haven’t heard, we’re big believers in the importance of wedding films. Check out our film gallery for our favourite films and videographers from around the world. 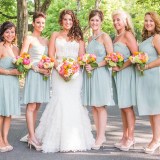 next up
Colourful Connecticut Wedding With an Abundance Of Fabulous Florals