An Interview With The Man Who Made THAT Proposal Video

So you may have seen a rather amazing, funny, surprising, heart felt proposal video I posted yesterday…if you didn't, click here, it really is a MUST SEE.

It left quite an impact amongst us hopeless romantics.

{I cried my way through the last few minutes and most of the wedding community on Twitter were sobbing into their iphones too!}

I don't know about you but after I dried my eyes, I wanted to know more…

So much time, thought and effort went into making the film, how on Earth did the guy pull it off?!

I got in contact with the proposer himself, who would prefer to be known as J {of J+S, the happy couple in the video} and he very kindly agreed to answer a few questions:

What was the inspiration behind your proposal?

My family has always joked that I had some sort of Charlie Brown black cloud over my head as strange and sometimes unfortunate things seem to happen. And as my friends married off one-by-one and I dated what seemed like every single girl in New York City, I'd wonder from time to time, if I would actually meet someone special or was destined to become the cranky old man who collects old newspapers and yells at kids playing on his front lawn.

And then one day, I just happened to walk into a bar I had walked into a million times before and everything changed. That bad luck suddenly turned into good luck. They aren't kidding when they tell you it happens when you least expect it. And I just wanted to convey to her how much she has completely changed my outlook on life.

Was there a particular film that the first part of ‘Luck' was based on?

I don't care for the sound of my own voice, so I thought it might be fun to find an older actor and tell our story from the perspective of “future, happily married for 50 years” me. I was researching voiceover talent when I came across this video by Gnarly Bay Productions that I thought was incredibly well done.

If you watch it, you'll see some similarities. I also watched the “If Only One Thing Had Happened Differently…” scene from Benjamin Button a few times and went from there. The VO, by the way, was a gentleman named Si Hawk who works in Oklahoma. I've never met him.

Being a professional DJ, the music must've been an integral part of the video for you. Why did you choose those two tracks?

I really do feel like life has a bit of a different spin now, so “Dog Days Are Over” seemed perfect. And the structure was perfect for cutting video to. I've always enjoyed “The Book of Love” and to be honest, it makes girls choke up, so seemed perfect as well. Back in August when I first start planning this, I would play Florence + The Machine (she thought the band was Florence Henderson + The Machine) randomly just so I'd know she'd be familiar with the song. At the time, it wasn't a huge hit yet.

How long did it take you to organise/edit/prepare the video? (Just for the tech geeks, what equipment & software did you use?)

About 9 months total, a little bit at a time. I bought a Canon 7D camera for our trip to France in August, shot everything I could from vacations, Christmas, Hanukah, bowling, skiing, making pancakes for breakfast. She was very, very patient with me always having a camera on-hand. I finished the video last Friday and proposed Saturday night. Most of the footage of us individually was shot by me with either the camera on a tripod/at the end of my ridiculously long arms or on a little GoPro HD.

The shots of us together were captured by my good friend Michael Porco under the guise of him needing “practice couples” to shoot for his wedding films company. I edited it on Final Cut Pro and a friend, John Wilkinson, mixed the audio. I had a lot of wonderful, generous people help me.

Where did you propose?

I proposed at sunset on a terrace at the Bowery Hotel in New York City.

Why did you decide to propose on film?

I thought having something on film might be a fun way to relive the moment whenever we wanted.

Did all those unfortunate events {kidney stones twice!} really happen to you?!

Sadly, yes. I only have myself to blame for the kidney stones (too much iced tea). Not sure how they always seem to figure out its my birthday, though.

What a fascinating story behind the story. I think it is clear that they are both so very lucky to have found each other.

I have to say a HUGE thanks to J for taking the time to share his amazing story with us and to Michael of Michael Justin Films who filmed parts of the video and was very helpful too.

Please do leave your thoughts and comments for J + S, I'm sure they'd be much appreciated.

Have a wonderful weekend, 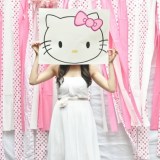 next up
A Very Pink, 'Hello Kitty' Bridal Shower