All weddings are fun. But today's real wedding looks like LOTS of fun!

David and Charlotte's festival wedding was a unique outdoor affair. Pretty and elegant, yet laden with charming features and lots of banter, their day was perfectly captured by wonderful duo, James & Lianne.

This cool couple looked gorgeous, David with a preppy bow tie and braces, paired with a homemade herb bout, and Charlotte, a stunning vintage bride, with a Claire Pettibone wedding dress, a dramatic veil and fab set curls.

Filled with DIY creations, lovingly collected and crafted by their friends and family (we're officially OBSESSED with the idea of a bunting guestbook!), and laced with music, dancing, fun and games – this is the kind of wedding we wish we were a guest at.

We'll just have to settle for swooning over their pics!

I was very torn between wanting something with a bit of a 20s/30s feel to it but also something that was a bit quirky and original looking.

I also wanted something a bit grown up and not too traditional fairytale. I’d been looking at the Claire Pettibone dresses and Jenny Packham dresses for months and when I finally got to try one on, I knew it was the one!

With the wedding being outside, we wanted a more relaxed feel to the groom/groomsmen’s outfits but still wanted them to fit with my posh dress!

So in the end we went for light colours with some pastels to compliment the bridesmaids, but had all the outfits mismatched to stop them looking too uniformed. And also so everyone could pick something they felt comfortable with!

I was very keen for everyone to be comfortable in their outfits. I had to find something to suit all four bridesmaids, that was within a tight budget, something not too modern that they would clash with the style of my dress and something that came in four different colours!

To make the search even harder I’d also left it quite last minute so ordering something from the internet was a bit too risky!

In the end my mum and grandma volunteered to make the dresses and they did such an amazing job! They looked so professional and fitted beautifully. The girls all loved them.

The boys outfits were quite tricky because David couldn’t see my outfit and I didn’t want to see his. So we found some photos together on the internet with a few ideas in and he went off with his groomsmen on a few shopping trips.

I was a little nervous not knowing but I think they did a fantastic job and they all got to wear something they picked out themselves.

We really didn’t want to have a long soppy ceremony.

OneLife Ceremonies were great at tailoring what we wanted to say into a 20 minute script with just enough lovey dovey stuff in there.

We had a few poems that we’d chosen, read by friends (He’s Not Perfect by Bob Marley, and It’s You I Like by Fred Rodgers) and David’s sister Christina and two cousins sang two songs for us a capella (Home by Gabrielle Aplin and Everything has Changed by Ed Sheeran), they sounded amazing!

I walked down the aisle to Peter Gabriel’s Solsbury Hill, which got everyone in a happy upbeat mood, and walked back up to Home by Crystal Fighters.

After the ceremony we had a 10 minute trip around the village in one of the vintage Rolls Royce cars my parents had hired as a surprise. It was lovely to have some time to ourselves.

So, after scouring the internet we narrowed it down to two local photographers. Both were equally as good and captured weddings in a natural way instead of a traditional formal style, which we liked.

However, looking through James and Lianne‘s portfolio we felt the vibrancy conveyed in their photographs reflected our personalities and what we wanted from our wedding day more and we also liked the way their photos told a story of the day.

The idea behind having several colours for my bridesmaids and the general colour scheme was purely my indecision to pick one colour!

I wanted a nice colourful wedding but I wanted it vintage/English country garden so ended up with pastel shades inspired by Cadburys mini eggs.

We had an afternoon with lots of female friends and relatives sewing 100m of bunting to match! Plus three of my best friends made extra flags to use as a bunting guest book for my wedding present.

I really didn’t want to do a first dance, I knew I’d spend all day dreading everyone watching us dance and was worried it might spoil the day, although I knew which song I would have liked to have.

Shortly after the photos I was surprised by two of the groomsmen playing guitar and singing the song I would have chosen (The Girl by City and Colour). David walked over and started dancing with me and it was lovely. We got to have our first dance without the worry, and I was so happy I didn’t care that everyone was watching us.

Half way through the song David’s brother handed David his guitar and he joined in along with his brother and remaining groomsmen on ukuleles. All my bridesmaid and mum and mother-in-law all got to dance with me to, it was fantastic!

Throughout the day we had lawn games which everyone was able to enjoy because the weather was beautiful.

In the evening we had our friend’s band played for us and they were fantastic, everyone had a good dance and David crowd surfed for the first time. They played a mixture of their own songs and some covers they had chosen themselves and that fit perfectly with the evening.

David spent a few hours DJing which he was keen to do, even though it was his own wedding, and then later on our friend Alex who was also in the band took over. Later in the evening a rather rowdy limbo competition got going!

We desperately wanted an outdoor wedding and with such a large guest list we needed somewhere that let us use all our own suppliers to keep the costs down.

We also wanted somewhere we could have tipi’s! We loved the warmth and the relaxed atmosphere of the tipis but also the amazing smell inside, which reminded us of a trip to Peru a few years previous.

When we found The Hideaway on the internet it ticked all the boxes plus it was very affordable, had fantastic facilities and plenty space for guests to camp.

Because we live in Lancashire and the venue is in Yorkshire people were travelling quite a distance, so it was important for us to have a cheap option of somewhere to stay over. There was plenty of places in the surrounding area too for non-campers.

We collected jam jars and Fentimen’s lemonade bottles from the cafe Zoe works at to hold the flowers, along with cream jugs to add to the English country garden feel.

We asked the florist to use soft colours to reflect the bridesmaid dresses and bunting, and to add some long ribbons to the bridesmaids bouquets to tie in all the colours and reflect the flowing length of  the dresses.

We handmade nearly 200 bottles of hot chocolate mix (I have some very good friends!) which as well as tying in with the camping/around-the-campfire feel to the weekend, provided extra decoration and colour for the tables.

Bunting – I would highly recommend getting family and friends together to make bunting. It’s so expensive in shops and was so easy to make when there were a lot of hands on deck and sewing machines. And it was such a lovely thing to do in the run up to the wedding. I think everyone enjoyed being a part of the wedding preparations. Plus we had lots of tea and cake to keep us going!

Hot chocolate favours – I would not recommend this one for large weddings, it was a bit of a nightmare even though they did look lovely in the end. We only put enough hot chocolate and powdered milk in for one hot chocolate so they could pour hot water straight in the bottles and have them on the night if they wanted. If you wanted to fill the bottles with ingredients it would have been a lot more expensive. Make sure you do taste testing before making them all!

Kids activity packs – I really loved making these for our little cousins and I think they enjoyed them on the day. Trying to make them age appropriate was quite tricky but there are lots of suggestions on the internet. I was quite jealous of the photo scavenger hunt and the activity books my bridesmaid designed. I wished I’d done myself one!

Fans – I used lots of tips from Wedding Bee, the packing tape was a great hint. Just make sure you stock up on plenty of double sided tape for round the edges. The flower patterns were found on Creative Market. The flowers we ended up using everywhere they were great! For the table names (which we used Harry Potter place names for) we had the flowers around the writing with love quotes on the reverse side.

Signs – I had a lot of fun making these, and they were free! My granddad cut up some old wood he had and my friend loaned me a load of tester paint pots she had left over. My dad then varnished them to protect them from the elements.

We liked the idea of a hog roast as it was a bit of a change to the traditional wedding breakfast and it was much cheaper per head for our large guest list.

The Hog and Apple absolutely surpassed our expectations with the food. It was like food from a posh restaurant in the middle of a field.

It was so beautifully presented and everyone was served about the same time. Not an easy feat for a tipi of 180 people!

We had an Italian style meat platter to start with salads and side dishes, and decorated with edible flowers. There were plenty of options available for the 25 vegetarians too!

With the hog roast which again was presented beautifully, we had wedges and a few different salads and condiments. And for dessert we had the lightest sticky toffee pudding I’ve ever tasted, and so tasty!

Later in the evening we had posh hot dogs (gourmet style sausages) and cheesey chips. Unfortunately I was so full from all the food earlier I didn’t have any hot dogs until they were cold. But they were still delicious!

Because the wedding was outside and also two hours from home, we got legally married on the 12th at Mere Hall in Bolton.

For anyone concerned about not legally marrying on your wedding day I would say don’t worry! You get to have two wedding days! Two wedding dresses! We had an intimate ceremony with immediate family followed by a meal.

It took a lot of pressure off the day on the 14th and didn’t take anything away from the big celebration or sense of occasion. The 14th very much felt like our wedding day and will be the day we’ll celebrate as our anniversary.

Isn't it just beautiful? I love Charlotte's DIY tips – and how amazing are her friends and family for getting in on the act! Wise words on having the civil ceremony a day or two before as well.

Thanks so much to the wonderful James & Lianne Photography and of course the lovely Charlotte and David for sharing their glamping wedding with us. 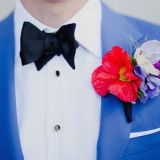 next up
25 Dapper Gents; Style Inspiration for Grooms