Okay, so this might be a beer ad. But it’s also one of the most romantic things we’ve ever seen!

Okay so this isn’t the kind of thing we’d normally share but it’s so freakin’ lovely we just had to jump on the blog and share it with you.

It doesn’t take a lot for a Christmas ad to get us welling up (ahem, JetBlue, John Lewis, Sainsbury’s), but this one by Stella Artoise is extra special.

We could tell you all about it, but we don’t want to spoil anything, so we’ll let Brendan (and um, Stella Artois) share the story instead…

Eeek! Isn’t it just wonderful, it has us tearing up and feeling festive all at once!

Brendan and Maeve are an Irish couple living in London too – so this story is extra close to Claire’s heart!

And rumour has it today is their four year anniversary – Congratulations Brendan and Maeve!

Head to the Stella Artois You Tube page to see the rest of the videos from their Give Beautifully campaign.

Love this video? Head to our Film Gallery for more love on film. 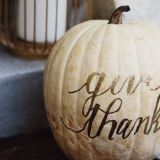 next up
Thanksgiving Inspiration; 24 Ways To Thank Your Wedding Guests