10 Of The Most Stylish Celebrity Weddings Of 2014

It's the kind of thing we can't help ourselves from pouring over. Who attended, (who didn't!), where was it, and what did the bride wear?

But these weddings are so much more than tabloid fodder to pick apart.

Over the years, some celebrity nuptials have stood the test of time to become the iconic, poster weddings of their day.

2014 was littered with gorgeous celebrity weddings. While Kaley Cuoco technically go married in 2013, she rang in the new year in a fabulous pink dress, and just the other day Jersey Shore's Snooky, held a Great Gatsby inspired bash, with a beautiful brooch bouquet.

But which 2014 weddings will we be talking about for years to come?

Here's ten of our favourites from the last 12 months, that we think could be contenders for Iconic Wedding status…

Why: Because shorts and a sweater have never been so chic!

The Guest List: Their family and just two friends.

The Dress: Carolina Herrera two-piece, with a sweater, and shorts with a tulle skirt overlay, and Manolo Blahnik heels.

Olivia and Johannes day was a simple celebration (the groom even took the pictures himself!) in June this year.

The couple said “I Do” surrounded by ivy, blossoming flowers and their closest family. Understated, elegant, and impossibly romantic!

Why: Because we're rooting for this Newlywed second time 'round.

The Details: After putting their plans on hold, twice, Jessica and Eric tied the knot after four years together, in July and shared their pictures, by the amazing Elizabeth Messina, in People Magazine.

Themed on the 1998 movie adaptation of Great Expectations, the couple walked down the aisle to the soundtrack score, while the entire reception venue was kitted out as a lavish, yet rustic setting.

With cascading blooms and ornate branches, the space was said to look like a luxurious ballroom in the middle of the forest.

Photos by Corbin Gurkin via Ashley Tisdale on Instagram

The Guest List: Vanessa Hudgens was a celebrity bridesmaid, while actress Shenae Grimes was among the guests.

The Dress: A Monique Lhuillier gown with a baby's breath flower crown.

The Details: Ashley and Christopher married in a top secret wedding ceremony in September this year.

Their low-key, yet elegant day was shared with 100 guests, with a tear-jerking ceremony, and a beautiful flower-filled alfresco reception on a private Santa Barbara estate.

Photos via The Daily Mail

Why: Because two weddings are better than one!

Where: London, England and Marrakesh, Morocco.

The Dress: Chanel for London, Emilio Pucci for Morocco

The Details: After having two hen parties (one in Coachella!) it was only natural that Poppy Delevingne and James Cook would go all out for their wedding.

The London affair was a pretty church ceremony with Poppy's sister Cara as maid of honour, followed by a cool bash at celeb hangout, Chiltern Firehouse.

For the bohemian festival leg of their wedding in Morocco, the couple and their A-list guests dined in a candlelit riad, and then let their hair down with one massive party.

Why: Because this was perhaps the most hotly anticipated wedding, like, ever!

Where: Pre-wedding prep in Paris, before jetting to Florence for the big day at Forte di Belvedere.

The Details: This wedding (and the week of extravagance beforehand) was unparalleled when it comes to designer attire (from the whole family), lavish feasts, and opulent settings.

The rehearsal dinner was held in perhaps one of the most ornate venues in the world, the Palace of Versailles, with Lana Del Rey serenading the couple.

While on the day itself, the hilltop wedding in Florence featured a wall of roses, a 70-feet long marble dining table (with each guest's name engraved on it!) and a rather talented wedding singer, you may have heard of him? Andrea Bocelli!

Why: Because their kids planned the whole thing.

The Guest List: Just 20 guests, including a few family members and the couple's children.

The Dress: An Atelier Versace dress designed personally by Donatella Versace – the children drew pictures, which were then embroidered on to Angelina's veil.

The Details: Angelina walked down the aisle accompanied by her eldest sons, Pax and Maddox, as Brad and the guests hummed Here Comes the Bride, in what sounds like one of the sweetest weddings ever (and kind of like the pretend ones you'd have as a kid!).

With a special surprise tribute to Angelina's late mother, the day was filled with poignant moments, but had a relaxed and fun vibe throughout. Oh and the vows were promises written by Shiloh and Knox – how adorable!

Why: Fireworks, Elton John, and this adorable pair. Need we say more?

Where: A friend of a friend's castle in Italy.

The Guest List: 50 close friends and family, including children Gidion and Harper, and Elton John.

The Details: This dapper pair tied the knot in September, after an eight year engagement (the couple only announced their engagement after the Equality of Marriage Act was passed in New York in 2011).

How I Met Your Mother director, Pam Fryman officiated the ceremony, and Elton John performed an impromptu set at the reception

The couple's first dance, A Moment Like This by Kelly Clarkson, hit a crescendo with a surprise fireworks display for their guests.

(P.S. How wonderful is that last snap!)

Why: Because Solange might just be the coolest bride of all time.

The Guest List: 100 guests including Beyonce and Jay Z.

The Dress: Solange changed several times over the day with a caped dress for the ceremony by Humberto Leon for Kenzo, and a jumpsuit by Stéphane Rolland.

The Details: Solange and Alan's wedding just about broke Instagram in November with all its hipster details, killer style, and cool features.

All the guests wore white, for a day that included the couple arriving on white bikes, dancing in the street with sparklers, a ride in an old school bus, and tearing it up on the dancefloor with a sweet mother-son routine.

FYI, we predict bridal capes are going to be HUGE in 2015.

Why: Because the pre-wedding style was unparalleled, and what wouldn't we give to have rubbed shoulders with that guestlist?

The Dress: A custom Oscar De La Renta gown (sadly the designer passed away several weeks after the wedding).

The Details: The whole world fell in love with human rights lawyer Amal Alamuddin as she captivated us with a weekend of gorgeous ensembles before and after her wedding. She and George hosted some of the world's biggest stars for a weekend of celebrations in Italy.

A string ensemble serenaded the guests throughout a 30 minute ceremony officiated by the Mayor of Rome. The couple exchanged vows (which they had written themselves) under an arch of beautiful white roses.

A five course gourmet Italian dinner followed the wedding. Oh and the party favours? Rumoured to be iPods, pre-loaded with playlists created by the newlyweds. Nice.

Photos by Elizabeth Messina via PopSugar

Why: Because we were inspired by every single detail!

The Guest List: A gathering of close family and friends, including Lauren's BFF and Hill's co-star, Lo Bosworth.

The Dress: Lauren wore three dresses throughout the day, with a white slip for the prep photographs, a custom Badgley Mischka lace gown with a 10 foot train, and a strapless Monique Lhuillier reception dress.

The Details: No one else but Lauren Conrad could throw such an inspired bash with so many beautiful details. Incredible photographer, Elizabeth Messina was there to capture the day.

Pre-wedding prep started with a soundtrack of Taylor Swift and Aretha Franklin, before a sweet ceremony under a floral arch (with a burlap aisle covered in gilded eucalyptus leaves!), and whimsical marquee reception (with floral arrangements Lauren created herself).

In a sweet ode to her new husband's name, Lauren chose a signature cocktail called Apple of My Eye, and painstakingly (alongside a baker pal) sliced 300 apples to create 50 pretty pie as favours.

Photo by Elizabeth Messina via PopSugar

Wow – they are some seriously stylish weddings, right? I love the mix of big budget bashes, glitzy A-list affairs, and intimate family occasions.

Which celebrity wedding was your favourite this year?

Be inspired for your own big day, and head to our Real Wedding Gallery. 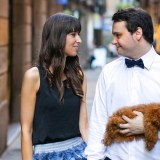 next up
Barcelona Engagement Shoot with an Adorable Fluffy Dog

How To Have a Feminist Wedding