Wedding inspiration can be found everywhere.

There are blogs, magazines and Pinterest of course. But also in homes and shop windows, in your style, your travels, your favourite haunts or someone else's big day.

And it can be found in nature.

Which is exactly where Suzi & Kevin discovered the concept for their Vancouver Island wedding.

No aisle, no table plan, no seat covers and no big bridal party. Spruce and cedar trees, a rocky shoreline, and the ocean beyond, gave them all the decor they needed for their harvest moon wedding.

This morning we showed you their blissful wedding film by Tomasz Wagner Photography & Film and now it's time to be wooed by Tomasz' photographs too.

It's weddings like this one that make us remember what getting married is all about.

And how often, inspiration can not just be found in the details, but in the lack of them too.

Utterly simple, incredibly intimate, and impossibly romantic, scroll down to take a look at Suzi and Kevin's minimal masterpiece of a wedding day…

From day one, we knew that we wanted a small wedding surrounded by nature.

The west coast of Vancouver Island has always been a favourite place of ours, so the decision to get married out there next to the ocean was an easy one.

We had found a lookout on the Wild Pacific Trail in Ucluelet, BC, the previous year, a short five minute walk from the parking lot, which provided the perfect backdrop of trees, rock, endless sky, and crashing waves; the only “décor” we added was a sign on the trail propped up with a boot to let people know that a wedding was going on.

We kept things simple and intimate and only invited our immediate family and significant others; 11 people in all, including us.

The day of the wedding fell on the Harvest Moon, which represented to us a sense of prosperity and natural beauty.

Our colour palette was predominantly white and grey, with punches of yellow and green.

At one point during the ceremony, all of those in attendance stood in a circle and read a page from a small book that we passed around.

The book was entitled ‘A Lovely Love Story' by Edward Monkton.

Climbing over the rocks for our “first look” in our wedding attire was pretty adventurous.

Another highlight was when our wedding commissioner Mike Gitelman busted out a guitar and played Neil Young’s song Harvest Moon while we were down on the rocks. Very special.

Another surprise was when our rings were presented on an open clamshell filled with tree moss. Beautiful! We followed up the ceremony with a champagne toast on the trail with everyone.

We had spent a bit of time online searching out various photographers and videographers in and around Vancouver and Vancouver Island.

We were really drawn to Tomasz’s work, because it felt like he had a really great way of capturing natural moments in very natural settings.

There was a sense of patience in what he created and there always seemed to be an element of nature in it, which really appealed to us.

He was also eager to shoot on actual film and super 8, which has a greater depth to the final image.

He was great to work with we’ll never forget when we first caught up with him in Ucluelet.

The day before our wedding, we decided to take our families out to the trail lookout so they could get a feel for where things were going to happen.

When we approached the lighthouse close-by, there was Tomasz and his team scrambling over the rocks, excitedly shooting and commenting on all the wonderful shadows and lines they were finding.

They were like kids in a candy shop and we knew right away that we had made the right choice to go with him.

The bridal dress was found at a thrift shop in Vancouver and then altered with personal touches.

We had a formal sit-down dinner back at the Black Rock Resort’s intimate west-coast themed wine cellar.

The wedding cake was modelled after a tree stump with our initials “carved” into the side of it.

Two small owls dressed as bride and groom (which had been salt and pepper shakers at one point, found on Etsy) sat on top of the stump.

The flowers were yellow and white freesia on fern.

Be true to yourself and don’t compromise.

So simple, yet so perfect. And if you think these photographs are beautiful, don't forget to watch Suzi & Kevin's wedding film.

Thanks so much to Tomasz Wagner Photography & Film, and of course Suzi & Kevin for sharing their one-of-a-kind Harvest Moon wedding with us.

Be inspired for your own big day with more unique real weddings. 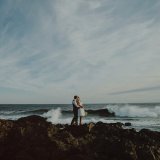 next up
Unique, Intimate, and Utterly Romantic Wedding Film

How To Plan A Luxurious Wedding At Home