Good morning, let's kick start Wednesday with something a little out of the ordinary and lots of fun!

But I wouldn't expect anything less from talented videographer, Michael of Michael Justin Films who helped to create this incredible video.

FYI Michael is quite the romantic. Michael and his girlfriend, Jackie, took a 10 day cross country trip from San Diego {where they were living at the time} to New York where they were moving to. He proposed once they arrived in New York, in front of the Statue of Liberty, on their three year anniversary and captured the whole trip and that beautiful moment on film!

So of course, their Save The Date video was bound to be something special and unique…

They created a backwards food fight!

Here's Michael with the details:

It was incredibly fun to film :) I suggest everyone having a food fight with their significant other sometime in their life. Filming it was actually pretty difficult because we knew we had one take and had to do it in reverse order so that what we finished with in real time, ended up as the beginning of the film.

Jackie + Michael: Creative Save The Date from Michael Justin Films on Vimeo.

Thanks so much to Michael for sharing this fantastic video and a huge congratulations to him and Jackie on their upcoming nuptials!

To see more from the Michael Justin Films crew, visit the website and blog.

Have any of you ever had a food fight with your partner?! Bet you really want to after seeing that video…I know I do! 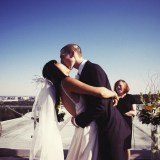 next up
A Cool Rooftop Wedding: Heart Hair & Scrunched Up Smiles {Part 2}

Wedding Geekery: Is This The New Photobooth?