Maybe she's born with it?

There's no maybes about it. I am a huge fan of Maybelline. Honestly, their Collosal Volum' Express is my favourite mascara EVER.

{And I've tried a lot of mascaras in my time from budget buys to full on ‘eat baked beans for a week' luxury mascaras.}

But as I was wondering around Boots the other day I saw that Maybelline had brought out a fancy new product that looked quite familiar, so I thought I'd give it a whirl:

Maybelline Eye Studio Lasting Drama Gel Liner is my latest obsession. It's similar to the fantastic Bobbi Brown Long Wear Eye Liner Gel and Mac Fluidline but at a much cheaper price. The great thing is you get a decent eyeliner brush included with the product {there's £2 off at the moment in Boots so it's only £5.99} so you get a pot full of product and a brush for under £6!

The version I bought is blackest black for an intense, jet black look

It comes in a range of colours ~ the Boots I was in was only selling black but apparently it comes in brown, charcoal and eggplant {purple}

Easy to take off

Brush is best suited to thicker lines {I read a few reviews saying it's great for thin lines but I just can't get the hang of it ~ I prefer kohl for thinner lines}.

The brush. Depending on your own personal preference using a brush can be a pro or a con.

You need quite a steady hand to apply but I think it's far easier than those felt tip nibs/stylus type eyeliners you can get as you can take more of a softly softly approach with a brush {especially as this product doesn't dry too quickly}.

However unlike those nibs which are covered evenly when you take them out of the tube, using a pot and a brush means you're in charge of the product ~ so you need to make sure you wipe the brush on the edge of the pot so the brush tip is evenly covered and not too full of product.

As you can see the pros far out way the cons!

I'm so pleased I found this product ~ it's my substitute for Bobbi Brown's Long Wear Eye-Liner Gel {which I love but which I haven't bought recently because of the hefty pricetag.}

So here's my pretty eyes kit for a chic look ~  with a thick line of black near the roots and a slight flick.

{FYI I've also been prepping my lashes with Rapid Lash for the last few weeks so they're getting longer by the day!}

What's your go to eyeliner and mascara combo?

Ps. Excuse my caterpillar eyebrows, they are in need of threading! 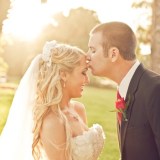 next up
A Glamourous And Colourful Beach Themed Wedding