Real Bride Diary: The Wedding Music (Plus Our Must-Have Playlist!)

Hello lovelies! As you may have noticed, my Real Bride Diaries are ramping up a bit lately, as we edge ever closer to the big day.

Today, it's all about the most fun part (in our minds, at least) of planning a wedding – THE MUSIC!

No matter how much effort you put into how you look, and how much money you spend on decorating your venue, if a great night is had on the dancefloor, that's what everyone's going to talk about the morning after your wedding.

Everyone has different priorities when it comes to their big day, but for us, the music was always going to be one of the most important elements.

– My current obsession: Trying to keep my skin acne-free for the next month!

– This week we’re mostly: Blasting our wedding playlist and getting massively excited!

I once read a survey that said that music and entertainment were the most common area couples had regrets about after their wedding, that they hadn't considered the importance of a good band, or they hadn't put enough thought into their playlist.

When it comes to Marko and I, we've been talking about, thinking about, and planning our wedding playlist since the day we got engaged, and we actually had our band picked even before then – so hopefully no risk of that then!

As with many couples, music has been important in our relationship. We go to a lot of gigs, there's always music on in our home, and both together and separately, there are so many songs that mark times, travels and transitions over the course of our relationship. So it was really crucial that we included as many of those as possible throughout our day.

So, when it comes to our wedding music, we've got a couple of different elements…

I'll go into more detail about the songs we've chosen for our wedding ceremony in a dedicated ceremony post, but our ceremony music is going to be performed live by some of our dearest friends, Brendan, Celina and Sean.

We did a rehearsal a few weeks ago and we all got a bit emosh when Brendan started to sing, so I'm hoping there won't be a dry eye in the place on the day!

We were really eager to have a live music element for our cocktail hour if we could afford it.

I mentioned this before in my wedding budget post, I'd really had my heart set on a mariachi band or a Cuban group for the cocktail hour (we were in Cuba last year, and there's live music EVERYWHERE) but unfortunately, they're pretty hard to find in Ireland, and when we did find one, they were crazy expensive.

So then, one day as we were listening to the Oh Brother, Where Art Though soundtrack (a great album!), I had a brainwave; bluegrass!

I'd almost forgotten, but Marko and I really liked a bluegrass band we'd seen at an event in London a few years ago, who we always said we'd book if we got married over here.

We figured the style of music would go well with beers and cocktails in the (fingers crossed!) sunshine, with our laid back BBQ vibe.

We found a really cool Dublin-based bluegrass band, Well Enough Alone, that were thankfully within budget, so I can't wait to have them get the party started on the day.

As I said last week when I was chatting about the decor, we really like the idea of our wedding having the feel of a bustling restaurant, so we made a dinner playlist that's pretty much our perfect restaurant background music.

It's got lots of Ella Fitzgerald and Frank Sinatra, along with James Vincent McMorrow, Yann Tiersen, Fleetwood Mac, James Blake, David Bowie, Villagers, and the Gypsy Kings – and it's about four hours longer than it needs to be (as you'll read below, that's becoming a theme!).

Everyone is so excited about our wedding band. Before we even got engaged, we knew we wanted Attention Bebe to play at our wedding.

They're an amazing nineties cover band from Dublin, they have about 12 members, a brass section, strings, a troupe of singers, and they're definitely not your average wedding band.

They tend to play music festivals and concert venues more than wedding receptions, think Gangsta's Paradise, Rhythm is a Dancer, Boom! Shake the Room and Maniac 2000 (only Irish people will know that last one!).

They're a serious party band and their gigs are infamous for getting the whole room bouncing.

Because they're such a big band, they were part of the reason we chose our venue (so there'd be enough space for all of them – with room for dancing!).

While they're not a traditional band, we think their nineties tunes will cater to a good cross section of our guests.

Added bonus: We also know the lovely Susan, who's a singer with the band from university, so it's pretty great to have someone we know on the mic.

We've bought glow sticks in preparation, and honestly, I'm so excited, I just know I'm not going to leave the dancefloor for the night!

So this is where we really got to have fun! So Attention Bebe will tear up the nineties tunes from 9-11pm, and after that, we've made a playlist to keep everyone on the dancefloor until the wee hours.

On our wedding website, we asked our readers for their playlist picks, and our crowd-sourced tunes are awesome. Beyonce, Love on Top, Tina Turner, Proud Mary, Blu Cantrell, Breathe; so many floor fillers.

Once we'd collated them, we sat down with a glass (a bottle) of wine, and added a bunch of our own favourites too.

Our criteria? Songs that would have you running back from the bathroom or the bar if you heard the opening bars.

At the end, once it was all together (minus Taylor Swift, because she's not on Spotify), we had over 18 hours of music. (So that'll be 19 once we add Swifty.)

So we have way more than we need, and every day, I keep thinking of more songs to add. There's a good mix for the little ones (Pharrell, Happy) to the older ones (The Beatles, When I'm 64 for my aunt who turns 64 on our wedding day) and everyone in between.

When it comes to your wedding playlist, while it's important to suit yourself and your tastes whether that's pop, rock or country, you also really need to think of your guests, especially the ones who are likely to dance, and make sure you've something in there for everyone.

My sister had only one request when we made her wedding playlist a few years back, no ABBA. But on the night, my aunties, who were tearing up the dancefloor requested nothing but ABBA songs!

So while you shouldn't have songs you really dislike on your playlist, there is something to be said for appealing to the masses!

So, with that in mind, I thought I'd share some songs with you guys. Don't worry, it's not all 18 hours, I've just picked a few wedding essentials for you guys, that I figure you can use as a good starting point for building your own list of big hitters.

Hit follow so you have it to hand (and while you're at it, follow Bridal Musings on Spotify, we've got some pretty awesome playlists on there!)

Oh and I almost forgot to say, we're not going for a first dance. I really love dancing with Marko on my own in the kitchen, but the idea of three minutes of slow dancing on our own in the centre of a big room? Not our cup of tea! We'd rather hit the dancefloor with the masses instead.

Have you got tips, advice or song picks for your wedding playlist? I'd love you to share them in the comments below!

Catch up on the rest of my Real Bride Diaries. 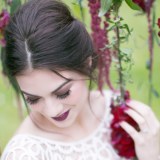 next up
Luxe Meets Edgy; Wedding Inspiration from New Zealand

The Dos And Don’ts Of Traveling With Your Wedding Dress