An elopement is always going to be romantic. All that intimacy, potential secrecy, and excitement!

But then add in a sweet couple, so obviously crazy about one another, and an epic backdrop on Lake Como in Italy, and you have yourself one pretty special party for two.

Amy & Corey got married with the most scenic ceremony, in a villa overlooking the iconic lake, and we’re so glad they brought the team from Twenty-One Films all the way from Raleigh, North Carolina to capture their big day.

With the loveliest first look, the most sincere vows, and a romantic boat ride around the lake (I love the part where the diners applaud the newlyweds as they take a stroll around town!), there are so many aspects of this wedding film that other couples planning to elope, might take inspiration from.

Read a little more about this sweet day from Anna at Twenty-One Films, then scroll down and hit the play button on on Corey & Amy’s atmospheric elopement.

I am excited to share Amy & Corey’s sweet and intimate elopement at Villa Del Balbianello on Lake Como, Italy.

Some of our favorite moments from the day included their handwritten vows and three-hour boat ride around Lake Como as husband and wife.

Amy and Corey spend their free time exploring the world together, so getting married half-way across the globe was perfectly “them”.

Oh it’s so romantic, right? I love how they seem a little nervous reciting their vows for eachother, it makes them all the more sweet and sincere, don’t you think?

Thanks so much to Anna at Twenty-One Films, and the lovely Amy & Corey for sharing their beautiful elopement film with us. 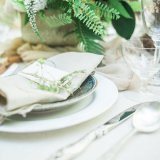