The Proposal {Our Wedding Story}

It all started with ‘The Seneca', my Uncle Ken's boat. My cousin Emma and I spent our earliest summers on the ocean, exploring Guernsey, Jersey and the Scottish islands {until the knackered old boat conked out when I was about 10!}.

That's where my love of the sea began. And my dream to own a boat one day…we're not talking a yacht here, a teeny tiny little motorboat or a dingy will do!

Every summer since, I've tried to spend my days by the ocean…often attempting, without much luck, to tan my pale English skin. I even left my urban ‘wrong side of Essex' roots to go to the seaside University of Aberystwyth. This occurred after a random and rather life changing Chinese takeaway shared with friends up by the Angel monument, at the castle ruins, looking out over the sea at sunset. Blissful.

I can't imagine what my life would've been like had I not gone to ‘Aber' and met that tall, dark, handsome, slightly cocky boy cracking some pretty awful jokes at Inn on the Pier. Especially as I hadn't intended to go to the pub at all. {I was meant to be doing my laundry at the Laundromat!!!}

Long story short: Zee and I became friends. Then much more than just friends. Then we fell madly in love…and as a result, I have a head full of wonderful memories and a box full of diaries/letters/cards/tickets/postcards. {Don't we all?!}

{Us on various holidays by the sea including Croatia, Santorini & Dubai}

You're probably thinking, why on Earth is she going on about the sea so much?!

Well…it's because Zee proposed in the most perfect, thoughtful way. He asked me to marry him, on a little boat made for two just off the coast of Amalfi!

Sweet the memory is to me
Of a land beyond the sea,
Where the waves and mountains meet,
Where amid her mulberry-trees
Sits Amalfi in the heat,
Bathing ever her white feet
In the tideless summer seas…

These words describe Amalfi much better than I ever could. The only thing that's missing are the over priced meals and the crazy moped drivers…but somehow that's all part of it's charm!

{Our room with a view}

So…on August 4th 2009 we were out on our little boat, I was loving being behind the wheel but Zee was feeling a little queasy, which was very unusual for him. {Now I know why…nerves!} After a little while, Zee took the wheel and seemed on a quest to find us the prettiest place to stop for a while and admire the view…

{Looking at Amalfi town from our little boat…this is the exact spot where Zee proposed, moments later.}

Zee said he wanted to take a photo of me so I jumped up on the deck, spread my arms out and gave him my biggest, cheesiest grin safe in the knowledge that, with a bit of persuasion he'd delete it for me if I looked dreadful. {Which I suspected I would as I had no make up on, windswept hair and, horror of horrors, I was in a bikini!}

But it wasn't the camera he got out of his bag…

It was a tiny little box…

He slowly got down on one knee…

And the weirdest feeling sweep over me. Like an out of body experience. I thought, this is it, it's actually happening. I can't even remember exactly what Zee said but he ended with ‘Will you marry me?' and I said ‘Of course!' and wrapped my arms around him. Because really…he didn't need to ask. We both knew that we were meant to spend the rest of our lives together.

It sounds idyllic but wasn't perfect by any means.

Zee started to feel very queasy just after I said ‘yes'{I hope it wasn't the thought of marrying me!} and it got so bad that he had to lean over the boat. If he had actually been sick that would've been quite a story for the grandkids! I quickly tried to start the boat because Zee felt better when the boat was moving, not just drifting. But the boat just wouldn't start! It was funny at first, what a situation to be in just after Zee's proposal…even Zee was laughing in his green state! Then I started to panic, thinking we'd be stuck out there for hours…

Luckily, after a few more panicked attempts to restart it, the engine roared and off we speed back to the harbour with thoughts of ringing our family and friends to tell them the AMAZING news.

Here's a few other fun facts about the events that transpired after ‘ Will you marry me?':

♥ We told the taxi driver excitedly that we'd just got engaged and he congratulated us! {it felt like we were in a movie} Then he proceeded to butt in on our excited chatter amongst ourselves and ask loads of questions about how long we were staying and if we needed a taxi for the way home…what an old romantic!

♥ When we got back to our hotel I realized that in all the excitement I'd managed to get very burnt! {Damn pale English skin conspiring against me again!}

♥ Being the geeks that we are, Mac books were at the ready soon after we got back and changing our Facebook status from ‘in a relationship with' to ‘engaged' was actually quite momentous!

♥ We went for a gorgeous dinner in Amalfi town but what with me looking like a red tomato and Zee still recovering from the seasickness, we called it an early night!

♥ And then there was the ring…that, is another story altogether.

But, regardless of all the awkward, funny, silly things that happened afterwards…

I'll never forget the salty taste in my mouth as I kissed Zee or the lapping of the waves against the boat as I thought, this is our moment, our happiest moment yet, that we will be retelling for years to come… 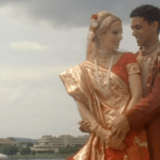 next up
A Glimpse Behind the Lens: Bridget Redmond of {First Kiss Films}