Are you a devotee to the late Princess Diana’s wedding day (and everyday) style? Or perhaps a fashion-loving bridal trendsetter? Either way, you’ll love the news about to break: Taffeta wedding dresses are back! And this time, so much more flattering.

Princess Diana on her wedding day

We’re guessing the past season of The Crown had much to do with taffeta’s current revival. Princess Diana’s dress was the ultimate 1980s bridal statement with poofy sleeves and endless volume. Designed by Elizabeth Emanuel and former husband David Emanuel, the gown is absolutely iconic. Made of taffeta, the thick-weave fabric gives gowns showstopping volume and structure.

A year after Diana & Charles’ 1981 royal wedding, 4700 miles away in Seattle, Washington, my mom (Janet) married my dad (Marko). Her silk-taffeta gown so clearly influenced by Diana’s style. While perfectly set in the 1980s, so many details of my mom’s dress – the sleeves, volume & high neck – are trending again now.

Diana’s dress influenced gowns for at least a decade. However, the poofy, structured, fabric-all-over style was eventually lost to slinky silk slip gowns of the 1990s. Last year, when the first images were released from the fourth season of Netflix’s The Crown, we were all suddenly reminded of the grandeur of Lady Diana’s wedding day look, just in time for extravagant bridal fashion to come back in style.

Whether or not we’re correct in our assumption that HRH Princess Diana has something to do with it, trendsetting bridal designers of 2021 are helping this retro fabric make a comeback. This time, the designs appear far more figure-flattering. Where 1980s taffeta wedding dresses delivered all-volume and poof, 2020s taffeta gowns exhibit balance.

Yes, we want volume. Yes, we want drama. But, we also want to feel some sort of modern sex appeal and semblance of shape. That might mean a high slit showing off a leg. Or perhaps, taffeta bridal separates, giving brides a defined waist contrasted with a showstopping skirt. Backless designs are a great way to show off some skin while still sporting a ballgown. Shoulder-baring taffeta gowns are the common ground between then and now, being oh-so-popular in the 1980s and today.

Eco-friendly fabrics lend another modern taffeta update. To cut costs, much of 1980s bridalwear (and clothing in general) was made of polyester. Taffeta today, particularly in the bridal world, is more often woven from high-quality silk. The once-held notion that taffeta is always a stiff, polluting fabric is long gone thanks to these luxurious silk weaves still giving off that iconic crisp ‘twisted woven’ sheen.

Alternatively, some designers are nobly making use of recycled polyester. Reducing our wedding’s carbon footprint is kind of our thing (and we hope it’s yours, too!)

Below, we’re rounding up our favorite modern taffeta wedding dress styles by bridal designers & eveningwear fashion designers alike. If you’ve been Googling “wedding dresses like Princess Diana’s” this is your list. To help, I’m enlisting my mom, Janet, for her sartorial take. Having worn taffeta to her own wedding, she’s choosing a few of her own favorite modern gowns as well. (Get excited, my mom loves bridal separates!)

The Cloud by Katherine Tash

Planning to make a statement? Take a look at these show-stopping bridal ballgowns for the fashion-forward bride. Follow our Wedding Dresses Pinterest board for even more trendsetting bridal inspiration. 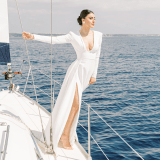 next up
Greek Sailboat Elopement Inspiration (As If You Needed Any!)

Claire Eliza
Editor-in-Chief
Photographing weddings for a decade, Claire Eliza knows a bit about boogying down on the dance floor. Obsessions include bridal fashion, entrances by horse or camel, and worldwide adventures.
Tags
Share this
@bridalmusings on instagram