Anybody who’s watched 90 Day Fiancé knows going through the process of bringing a foreign fiancé to the United States can be complicated, stressful and full of drama.

This is immigration lawyer Parviz Malakouti-Fitzgerald here to tell you there are a number of important steps to take and problems that can arise, which is why getting a licensed immigration lawyer to help you is the safest bet to avoid a denial that can put enormous pressure on the life and relationship of a young couple.

However, in my experience as an immigration attorney helping many couples through this process, there are some mistakes and misconceptions that I see more than others.

As with any immigration process, all forms must be properly filled out and accompanied by the required supporting documentation. However, here are the top six mistakes to avoid specifically with a K-1 fiancé visa application:

Let’s get into the details…

Mistake #1: Getting Married Before the Foreign Fiancé Arrives to the USA

A requisite to qualify for a K-1 fiancé visa is that both the petitioner (the U.S. citizen fiancé) and the beneficiary (the foreign fiancé) must be a) unmarried, b) able and c) intending to enter into a marital relationship with one another. Applicants start the K-1 fiancé process with the filing of the I-129F Petition for Alien Fiancé(e) then they sometimes get impatient!

In their impatience, they get married while the K-1 visa process is still pending. This is a mistake that makes the foreign fiancé ineligible for the K-1 visa. In this instance, the couple must start an immigration process over again. This time likely applying for a marriage-based immigrant visa via consular processing.

This mistake could delay the foreign fiancé’s arrival to the United States by a year or sometimes even more.

Mistake #2: Failing to Get Married Within 90 days

Immigrants who enter the United States on a K-1 fiancé visa must marry their U.S. citizen fiancé petitioner within 90 days of entering the United States. Sometimes in the excitement and hustle of moving to the United States and adjusting to a new life, K-1 visa entrants forget or delay getting married until after 90 days.

This can be a big issue that results in difficulty applying for adjustment of status. It can even result in a green card application denial.

When applying for a K-1 fiancé visa, the petitioner and beneficiary must prove to both USCIS and the interviewing consulate that their relationship is “bona fide.” This means that they have a real relationship based on love. Not just the desire to secure a visa to the United States.

This evidence comes in the form of pictures together, travel itineraries from trips to see one another, emails to one another, Skype and telegram messages. Think of what a relationship scrapbook would look like.

Oftentimes, a couple will not provide enough of this evidence, which can delay the case or cause a denial.

Mistake #4: Being Unprepared for Several Months Without Work

Mistake #4 is one of the sneakiest and is an issue that very few K-1 couples know about or consider. It’s the fact that a foreign fiancé arriving to the United States will likely have to wait at least five months without having a work permit. That’s because a K-1 fiancé does not receive work authorization in the United States until either an I-765 work authorization application is approved or the green card application is approved.

Unfortunately, many couples are ill-equipped for the scenario in which the foreign fiancé has to stay in the United States, without the ability to work. If not properly planned for, it can cause financial hardship, emotional distress, and even strain on the relationship.

K-1 couples should consider this fact and plan ahead financially for this consideration.

Mistake #5: Not Arriving in the USA in Time

K-1 fiancé visas are usually issued for a single entry and are valid for six months from the date they are issued. This means the foreign fiancé must travel to the United States within that six-month time frame.

Due to constantly changing travel restrictions and even travel bans, individuals arriving to the United States on a K-1 visa have to take care to make sure they plan their travel carefully so that they arrive during the period of the K-1 visa validity.

Failure to do so could result in the K-1 couple having to start the process over. They'll then have to apply for another K-1 visa or marriage-based consular processing.

One of the biggest sources of confusion for K-1 fiancé applicants is the affidavit of support (I-134). Plainly stated, affidavits of support can be confusing.

The form must be filled out correctly. The minimum qualifying income of the sponsor must be calculated properly. The correct accompanying documentation of income must be submitted. And finally, the sponsor must be a U.S. citizen or legal permanent resident. This means that if the U.S. citizen fiancé does not meet the income threshold, they may not qualify on their own as a sponsor. In that case, finding a qualifying U.S. citizen or legal permanent resident joint sponsor may be necessary.

We see lots of people slip up on one or more of these issues related to the affidavit of support. It’s critical to read and follow the I-134 guidance very carefully.

Photo by Sophie May Photo via Bridal Musings

If you think you’re about to start a K-1 fiancé process, it can pay to have a consultation with a professional. Look for someone that has years of experience with the U.S. immigration system. In a consultation, you can have your case screened for potential problems- including ones you may not be aware of.

During the consultation, you can have your questions answered about the process. You'll find out how much it would cost to have the case handled for you by our firm. Putting your mind at ease.

When you’re ready, book a consultation right away.

The Law Office of Parviz Malakouti does not guarantee the accuracy of the information presented nor assume responsibility for actions taken in reliance of this information. The information in this page could become outdated. Each immigration case is particular. You should consult with a qualified, licensed immigration lawyer about your case before taking any steps. 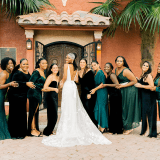 Contributing Writer
Writer
Bridal Musings' contributing writers are made up of a diverse group of wedding industry professionals and authors. To contribute your own expert advice please visit our contact page.
Tags

Real Talk: Are Constant Questions About Your Wedding Driving You Mad?

Marrying Debt? Here’s How To Start Paying It Off Together

Real Talk: What To Do If You Have Your Period On Your Wedding Day