I can't get enough of ballerina buns at the moment.

Also referred to as the ‘blogger buns' because savvy fashion bloggers everywhere seem to be sporting big, voluminous buns atop their heads.

Ballerina buns are a stylish, chic and classic up do for brides. They come in various shapes and sizes from sleek donuts to messy knotted styles.

Perfect for destination or summer weddings when you want to have your hair off your neck and shoulders or if you want to show off the detailing at the back of your gorgeous wedding dress.

via Style Me Pretty | via The Beauty Department

Jamie Beck via from me to you

What do these beautiful buns have in common?

Once upon a time it seemed that big ballerina buns were only for those lucky few blessed with super thick, lustrous hair but now, us thin haired gals can get in on the act too…

There are a variety of styling techniques that can help pump up the volume of a basic bun such as backcombing, pulling, wrapping or even knotting hair. Use clip in extensions or a genius little contraption known as the donut ring (available at beauty stores and H&M) or even, a humble sock!*

Bridal buns aren't just for models, fashion bloggers or celebrities dontcha know. They are a classic, timeless choice for brides too.

Danelle Bohane via Pocketful of Dreams

Or that you could rock a bridal bun to any weddings you're attending this year!

*Sock bun tutorials have been doing the rounds on the internet for a while now. The premise is, instead of using a traditional donut ring hair accessory (as used by hairstylists) to create fuller, more rounded buns, you simply use a sock.

You cut the toe area off, roll it in on itself to create a donut hole shape, pop your ponytail inside and wrap your hair within the sock by rolling it back on itself. Sounds complicated but trust me, it's not.

Sock bun video tutorial ~ this is the first tutorial I ever saw on sock buns and it's very helpful to demonstrate the difference between using a donut ring (the traditional way) and a sock:

I've used both a hair donut and a sock to create ballerina buns and I like both effects. With the sock bun, I especially like that I get a little bit of a curl in my hair once I take my bun out (if I put it up while slightly damp). But I prefer the rounded shape I can achieve when using a hair donut to create my bun and that I can make it look more messy. I like hair to look a little disheveled.

A Few Top Tips On Creating The Perfect Ballerina Bun

~ Ballerina buns are best suited to mid-length to long hair.

~ If your hair isn't long enough to get into a high ponytail then consider clip in ponytail extensions.

~ Use dry shampoo and thickening spray to add a bit more oomph to fine hair.

~ Tip your head upside down when pulling your hair into a pony tail and remember to brush the back (otherwise you can end up with a droopy effect).

~ If you'd like more volume, create texture by curling / crimping sections or backcombing the tail of your ponytail.

~ Use a thick athletic sock to create an ever bigger bun.

~ For extra height layer two donut rings on top of each other.

~ Once you've created the desired effect at the top of your bun, spray lightly with hair spray. Don't over do it, crispy hair is not pretty!

~ If you prefer to have some hair around your face, leave your bangs down or pull wispy bits of hair from around your ears.

One last bun just for fun…

Will you be wearing a ballerina bun on your wedding day? Or perhaps to the next wedding you're a guest at?

And the big question is are you a sock bun or a hair donut kind of girl? 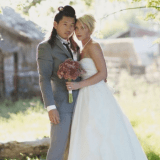 next up
DIY Picnic Wedding: 500 Paper Cranes Under The Willow Tree