Something magical happened in the California desert not too long ago. Kat and Lovine, two musicians, artists and modern day hippies jumped in their red, VW campervan and headed out to Death Valley to get hitched.

Their friend Jay took some awesome photos (see Part 1) and super talented cinematographers, Modern 8 Films went along for the ride too!

It's beautiful, sweet, fun and epic all at the same time. I was captivated from the first few seconds of footage of the sun rising over the desert to the awe inspiring time lapse of the shooting stars twinkling in the night sky above the campsite.

I bet you've never seen a wedding film quite like this before!

Here's what Ted and Alanna of Modern 8 Films had to say about this unique wedding in the desert:

Kat and Lovine wanted a small, intimate wedding in the middle of nowhere.  They asked us to capture the journey on super 8mm film so that they could show their adventure at two post wedding receptions (one held at The Marvimon, Los Angeles, the other held in the Philippines).

Our journey with them began at a gas station off the 395.  As they pulled into the station in their red VW bus (affectionately called “Vanessa”) the crew piled out – Kat, Lovine, Nickel the dog, and a few friends. The first day of shooting started at the park entrance sign, and then we continued on down into Death Valley. Down, down, and down some more until we were 100 feet below sea level.

The next day started out like any other wedding: a white dress, a groom, flowers, family… But then we started our trek.  We were headed out 80 miles to the wedding site and family camping trip turned reception.  60 miles on pavement with a few classic stops: Zabriski Point, The Devil's golf course, Stovepipe Wells, and Ubehebe Crater.  Then the last 20 miles off road to The Racetrack Playa for the Ceremony and Reception.  The Racetrack Playa is named after the mysterious “moving rocks” and is the flattest natural surface on Earth. It is also a very dramatic spot for a wedding ceremony.

For the reception Lovine, Kat and their guests sang songs by the campfire, roasted marshmallows, ate BBQ and danced the night away under the stars. It was the most inspirational wedding we have ever had the privilege to film.

A few months after the wedding we joined them and about 150 of their friends at The Marvimon for a screening of the film/second reception.

Here's a few photos from Lovine and Kat's second reception where they unveiled their wedding film:

Here's what Lovine and Kat had to say about their cinematographers:

Modern 8 Films did a fantastic job of capturing the magic of the day through super 8mm film. It’s really amazing the power of film and how it moves everyone who has the chance to view this, and hear our story. Their work is really the icing on our cake, and have blown all our expectations out of the water. Lots of people shed tears, and a lot of guys are mad at me for “raising the bar”, when in fact, we all just put it where it belongs.

So, what have we learned?

If you do decide to elope or have an intimate wedding, invite some awesome cinematographers such as Modern 8 Films along to capture your day so that you have a special film to share with friends and family who couldn't be there!

Oh and Nickel is a legend.

As always, I'd love to hear your thoughts. Were you as captivated by this film as I was?

Anyone else planning an intimate wedding and then a reception(s) at a later date? 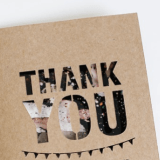 next up
Fantastic DIY Wedding 'Thank You' Card Idea