A Musical & Moving Wedding Ceremony As Told By The Wedding Reporter

Grab yourself a warming cup of your favourite beverage and go sit in your comfiest, coziest chair.

It's storytime here on Bridal Musings.

Yesterday, we saw the beautiful photos…

Now it's time to get well and truly lost in the story of Jack and Susanna's wedding ceremony told exquisitely through the eyes, ears and pen of Emma Woodhouse, The Wedding Reporter.

If you're wondering who or what The Wedding Reporter is, please hold that thought. I'll tell you all about this unique concept and the inspiring woman behind it in a few moments.

For now, let her beautiful words wash over you and transport you to a summer's day not so long ago when two people and two families came together as one amidst the sound of music, laughter and love.

From The Wedding Reporter:

No one who was there that day could deny that they witnessed love in its purest form and magic in its most mysterious of ways. Like those who claimed that they were at Woodstock or the 1966 world cup final, there were people present who would go on in life to declare proudly that they had been at Jack and Susanna’s wedding.

They probably didn’t know it on that warm Thursday afternoon as they shuffled into the pews of St Joseph. As the rainbow of colourfully attired guests with their immaculately coiffed hair and excited laughter found their places, they watched a groom in a grey morning suit accessorised with a vintage oversized red velvet bowtie, spats and a pimp cane indulge in a group huddle with a group of his groomsmen and ushers.

They watched as elderly relatives and old school friends, colleagues and well wishers filed into the church and sat beneath a canopy of gilded stars whilst the sun shone through elevated windows overhead. They listened to the serene tinkling of a keyboard as the din of excitement bubbled up and threatened to burst.

As they thumbed through the pages of their orders of service and watched grinning groomsmen stride up and down the aisle, they had no idea what was to come. They didn’t know that the day would be accompanied by a soundtrack that ranged from the most jubilant and uplifting of gospel to the quirkiest acoustic mash-up of Eminem and Britney Spears.

Knowing Jack and Susanna, they must have had an inkling that this was to be a wedding like no other. It would serve as a testimony of their love for each other, for their family and friends and for the life which they lived, but no one could envisage the perfection with which they had tailored their celebration to be a love letter from the very core of their hearts.

Traffic continued to stream down the tree-lined Georgian road, oblivious to the pending celebration. Passers-by stopped on the pavement to watch the gaggle of flamboyantly dressed people file into the church, a happy distraction from school holidays, working weeks and market days; they lingered longer than they needed, waiting for the doors to shut and for the first glimpse of the bride arriving in a majestic green vintage Rolls Royce.

Inside the church, time seemed to tick interminably for Jack, left standing alone at the altar. Minutes felt like hours as midday approached, waved cheekily and passed him by, bringing with it no sign of his bride. He made a panicked face, forgetting the audience of hundreds behind him could see him and having to turn it into a comedy routine as they guffawed with laughter.

A choir of two dozen smiling young faces filed into position, all dressed in white and cream, the girls with garlands of daisies and flowers in their hair looking like a band of woodland nymphs who had been caught together in a net and brought from another world to serenade the soon-to-be-weds. In reality, they were a crack squad of experienced singers, brought together by the bride for this day and rehearsed to perfection to provide the musical accompaniment of the next 90 minutes.

The false alarm of Julia, the mother of the bride, being escorted to her seat at the front prompted nervous giggles from a few as silence descended. The large doors at the end of the church opened at last, allowing the feverish laughter of the bridal party outside to flood into the waiting room. Hundreds of feet hit the wooden floor as the congregation stood in anticipation.

As necks craned to try and catch a first glimpse, Julia could be overheard explaining to those around her that they had only been delayed because of the logistical effort of getting the bride’s dress into the car. At the end of the aisle, Joanne bent her tall frame to organise the flower girls as the sound of Mendelssohn’s wedding march infiltrated the church.

Mia and Autumn set off along the aisle in their tiny dresses of tulle and lace, bringing with them a procession of elegant bridesmaids dressed in long-sleeved cream 1930s style dresses with embellishments at the shoulder that made them appear to be a parade of glittering angels.

In the middle of Mendelssohn’s march the choir suddenly erupted into the opening strains of Lennon and McCartney’s ‘All You Need Is Love’;the veracity and surprise of the change in song causing those closest to the ensemble to visibly jump in delighted shock at the wall of sound.

Joanne struggled to retain her composure as she led the procession along the aisle, fighting back the tears as the music transported her towards the altar and her waiting brother. Settling Autumn into a seat next to her father and depositing a stuffed bunny rabbit with her daughter, Joanne took Mia’s hand and guided the curly-haired girl up the stairs.

The music switched again, the choir singing the love song that Susanna had written for Jack, who greeted his sister with a big smile and a kiss as she took her place opposite the groomsmen.

Following in her wake, Emily, Jamie and Katy began their long walk through the nave with massive smiles on their faces. They glanced around at the assortment of faces watching their progress but continued to look at Jack and the selection of boys that flanked him on the stage.

“Your brown eyes look at me and I go weak at the knees,” the choir sang, the medley of their voices rich and enrapturing as the bridesmaids mounted the few short steps and took their place beside Joanne and Mia, grinning at the groomsmen across the chancel.

With the light of the afternoon streaming in through the doors behind her, Susanna appeared first in silhouette before the full beauty of her presence could be absorbed. Her hand lay softly on top of her father’s own elevated hand and, with a steadying deep breath, the two began their ascent along the cream coloured aisle.

The combination of the music, the vision of Jack’s wobbling chin as he caught sight of his diaphanous bride and Susanna in her stunning Pronovias gown sent legions of guests into a cascade of tears. The feathered sweetheart bodice on top of a vast circle of full tulle skirts seemed to be absolutely moulded to her body, creating the perfect shape. The vast train of her dress and cathedral length veil seemed to fill the entire width of the aisle as she walked.

Her emotions danced across her face as she glanced up at Jack and took a deep breath to reign in her reaction, smiling as she passed by pew after pew of awestricken friends and family. As he waited for her with his hands clasped lightly in front of him, Jack could not contain the smile that stretched across his face and would remain in place throughout the rest of the day. Behind him, her brothers grinned at the sight of their beautiful sister…

A shout of celebration and laughing tears could be heard amidst the applause as the priest invited Jack to kiss his bride. Jack obligingly circled his arms around Susanna’s minute waist, pulling her close to him as their lips met in a long, ardent kiss that bestowed in it the love of eight years and the poignancy of the moment. His fingers rubbed the exposed flesh of her back tenderly as their noses rubbed together beneath the cacophony of jubilant sound around them.

“Now for something that Jack isn’t expecting because we didn’t do it at rehearsal,” Father Nicholas said.

Susanna rose from her seat and as she briefly flicked her eyes over to him, Jack felt his heart lurch and his voice catch once more. Untangling her dress from the edge of her seat, she left him in tears once again as she made her way to the edge of the chancel and listened to the gently strummed notes of the guitar.

“For you there'll be no crying,” she began to sing, her voice melting into the ears of her rapt audience as the beautiful love song poured out from her heart. “For you the sun will be shining…”

The lyrics filled every crevice of the church as Susanna closed her eyes and placed a hand on her diaphragm, allowing the full weight of every word to soar beneath the arched ceiling.

“To you I would give the world,” she serenaded her husband. “To you I'd never be cold, because I feel that when I'm with you it's alright; I know it's right…”

Tears fell silently throughout the church, her powerful voice muffling the sniffles and sobs of her devoted friends and family.The romance of the gesture combined with the sentiment of the words was the perfect seal on this most celebrated of marriages.

The guitar faded away, she grinned and blew a kiss across the chancel to Jack. He rose from his seat and crossed the short distance of space between them to kiss her beneath a soundtrack of emotional applause and approving cheers.

Emma has such an incredible way with words. Didn't you feel like you were right there with them in the church?!

Jack and Susanna's wedding report goes on to document the special moments throughout their entire wedding day. It makes for tearful reading (even for someone who has never met them before!) and is sure to be a treasured keepsake passed down through their family as well as a wonderfully sentimental addition to their bookshelf.

A Little More About The Wedding Reporter:

The Wedding Reporter is a unique service whereby Emma (who is just as lovely as she is literary) attends your wedding, soaks up the atmosphere, details and special moments (mainly from the sidelines but also through chatting to your friends and family) then writes a glorious, non-fiction report about your day.

I love that Emma actively celebrates and revels in the romance of the written word, especially at a time when the wedding industry (and life in general) is becoming more fast paced and digital. She adds another beautiful layer to the weddings she attends with her enchanting reports.

Emma explains, The Wedding Reporter was created out of a passion for both words and love; combining the two into something that people can treasure for generations is both a privilege and an honour.

Check out her website for more information about her services. Emma is based in Bristol, England but is happy to travel. 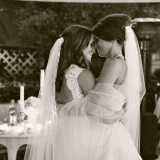 next up
Magic Moment: The First Dance

A Whimsical Wedding Reception In The Woods