Let's escape to the beautiful Dalmatian coast for an intimate and oh so chic destination wedding in Croatia filmed to perfection by Deneemotion. You'll love the grey bridesmaid's dresses and lavender bouquets, the stunning footage of the bride and groom strolling around the old town of Hvar, the love and fun filled atmosphere and the uplifting music.

Deneemotion are based in the UK but happy to travel. 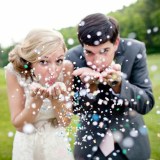 Back To School Themed Wedding Full Of Creative DIY Details