Shelly and Dave had a rustic, DIY wedding on a windy hilltop. There was a BBQ, home brewed beer, cotton bouquets and a retro chic 1950s bride. Modern 8 Films captured their day beautifully on super 8mm film with the most adorably cute and quirky soundtrack.

My favourite part of the film? Dave carrying his new bride up a flight of steps and twirling her round joyfully!

Modern 8 Films are based in California but love to travel. 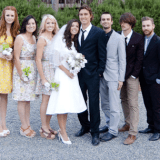 next up
Rustic, DIY Farmhouse Wedding With A 1950s Style Bride Part 2