I just LOVE this.

Tom Fletcher of UK band, McFly, got married to his long term girlfriend, Giovanna, last May and, due to his anxiety over public speaking, he decided to sing his groom's speech.

The resulting wedding song/speech was unique and oh so sweet.

And lucky for us, he's just posted it to online! (Scroll down to see the full video)

Tom began his speech by saying:

Then treated his guests to a medley of re-worded McFly songs filled with funny, charming and sentimental lyrics.

Traditionally it's the groom's job to thank the people involved in the wedding and usually this is rather dull for all those guests not being thanked but not this time! Tom gave fun shout outs to his ushers and the bridesmaids as well as thoughtful thank yous to each of his bandmates.

He then sang the sweetest, teary and endearing thank yous to his parents and in-laws. (You may need a few tissues when it gets to that part!)

Tom completed his speech by serenading his beautiful new wife with one of McFly's greatest hits ‘It's All About You' along with help from a children's choir from the Sylivia Young Theatre School (which is where the couple met!)

Oh and in case you're wondering, Giovanna's stunning wedding dress is by British Designer, Phillipa Lepley.

So…is that one of the best wedding speeches EVER or what? 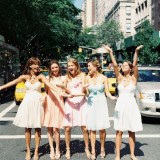 next up
Donna Morgan ~ Chic Bridesmaids Dresses Your Maids Will Love

How To Give A Good Wedding Toast