The Royal Wedding in Photos: Dedicated to ‘The Dress’

Along with billions of others around the world, I watched the Royal Wedding ceremony this morning and it was simply magical watching history unfold…

It was a fairytale wedding in every sense from the emotive music, uplifting readings {including the poignant sentiment that ‘every wedding is a royal wedding'}, dashing groom in military regalia, beautiful bride in ivory lace, with a long train trailing behind her, the horse-drawn carriages and the iconic kiss on the balcony of the palace.

This post is dedicated to the Duchess of Cambridge's stunning wedding dress {that's her new title now don't you know} because my goodness, Sarah Burton of Alexander McQueen, who designed the gown, deserves a round of applause!

Catherine looked every inch the graceful, classic, demure, English rose…she carried herself beautifully, and even waved liked a princess!

Remember how Catherine incorporated the traditional Language of Flowers into the wedding cake? She also used myrtle ‘the herb of love' in her bouquet {as it is a symbol of good luck and a Royal bridal bouquet tradition} and she incorporated the flowers of each British nation into the lace applique on her wedding dress…how wonderful!

Here's a quote from Julia Neel of Vogue to describe the finer details of the dress:

The lace appliqué on the bodice and skirt was hand-made by the Royal School of Needlework, while individual flowers were hand-cut from lace and attached to ivory silk tulle to create an organic effect, incorporating the rose, thistle, daffodil and shamrock. The hips of the dress were padded and the skirt echoed the opening of a flower with a train that measured 2.7 metres. {via Vogue.co.uk}

Wedding dress designer Philippa Lepley, who had been touted as a potential candidate herself said: “It's very understated, quite classic and timeless. it's almost Grace Kelly-esque.” {via BBC}

And…here are some beautiful images from the wedding and of the dress that The Telegraph's fashion director Hilary Alexander described as “the Wedding Dress of the Century.”

{Got to have a picture of the princes looking dashing as they arrived at Westminster Abbey!}

{The prince said: “You look beautiful” when Catherine joined him at the top of the really long aisle.}

{Check out the ruffles on the back of her dress and the way her veil lies…so gorgeous!}

It was a very Disney kiss {a blink and you'll miss it peck really} but spurred on by the crowds, they kissed again! I can't imagine how surreal and embarrassing those kisses must have been for them!

I'd LOVE to hear your thoughts on Kate's dress…I thought it was the perfect choice! What did you think?

Ok, let's not limit the discussion to the dress…how about her hair? The tiara? {Which was her something borrowed from the Queen herself no less!} The veil? {I actually like the fact that it lay flat on her head and was not cathedral length, the lace edging was so pretty!}

{All images via BBC and 2nd from bottom image Daily Mail} 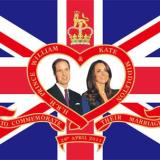 next up
Congratulations to the Happy {Royal} Couple!