San Francisco Engagement Shoot With One of the Cutest Proposal Stories Ever!

Niki and Louis' proposal story is the kind of, “Will you marry me?” teenage daydreams are made of, (more about that in a moment) so it's fitting that their engagement shoot was a dreamy day to match.

These San Francisco sweethearts spent the afternoon frolicking at the beach, in the park and then on to the amusement arcade, the scene of their perfect proposal.

All snapped perfectly by the ever-talented Caitlin Turner Photography, this pair look so in love, returning to special places from their courtship and their childhood to celebrate their engagement.

We'll let Caitlin tell you a little bit more about Niki and Louis' love story and their gorgeous engagement shoot.

When Niki, a talented artist who carves, inks and prints all of her own card designs for her company, Foreignspell, reached out to me to photograph her upcoming wedding I immediately said YES!

Niki and Louis’s love story began in Seattle as college sweethearts with lots of laughs, adventuring around the PNW and too much food. Eventually, they made the trek (with their cat, Gracie, in tow) to the Bay Area.

As San Francisco and Oakland natives, they often imagine their paths crossing as little ones. Perhaps in parks, museums, grocery stores, or at the beach – knowing that their love was meant to be from the start.

Our shoot started at Boat Park in Golden Gate Park & Ocean Beach – and ended at Musée Mécanique in San Francisco.

Being able to incorporate many of Niki & Louis' favorite San Francisco spots into the engagement shoot ensured it would be a fun day.

And over to our bride Niki  to fill you in on how, dashing romantic, Louis, popped the question.

Louis and I were engaged on April 14, 2013. He crafted a truly perfect engagement story for us!

We started by hiking in the Oakland redwoods (where we will soon have our wedding). We chose a super tough and quite long uphill trail that ended in an amazing vista overlooking the bay.

After, we grabbed some Tcho chocolate treats and headed to the Musée Mécanique in Fisherman's Wharf.

We both grew up playing around in the original location and have since spent anniversaries, friend/family visits, and fun afternoons there.

When we entered I was all pumped to play some of the old timey games, but Louis couldn't wait any longer and ushered us both into our favourite photo booth.

He was really nervous, so the dollars wouldn't be accepted by the machine and when I put my hand on his back I could feel his heart exploding. It was so cute! That's when I had a feeling that the best proposal ever was about to happen. So creative and sweet!

The first flash of lights caught us off guard, but by the next he got down on one knee and proposed. Such a classic and perfect moment!

Is it bad that we're a little bit jealous of Niki for getting to have our dream proposal?

What a stunning shoot from Caitlin Turner Photography, I love the mix of ethereal beach shots and fun photo booth pictures, beautiful memories and gorgeous pictures to have for years to come.

Thanks so much to Niki and Louis for their this sweet engagement shoot with us, and best of luck with your impending nuptials later this month. 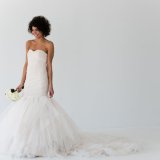