“You are the sunshine of my life.”

This might be the only line we understand from Swiss groom, Cedric's, wedding speech, but when it comes to spotting true love, we don't need to speak French to be able to tell you that this fun-loving couple are head over heels for each other.

Their beautiful film by Scottish husband and wife film makers, White Balloon Films shows the perfect Scottish wedding day, with pipers, whisky toasts, tartan touches, and a thistle cake topper, all with stunning views, romantic moments, and lots of tears, laughter and dancing along the way.

Joanne and Cédric are a gorgeous Swiss couple who live in Dubai and chose to marry in Scotland.  The chose two of the finest venues in Scotland, Govan Parish Church and Mar Hall.
This wedding had elements of vintage and so does our videography style, but the overwhelming feeling is of class and sophistication.  At times it felt like we were at an ambassador's ball filming a Ferrero Rocher advert and not a wedding!
As you can see in the video, the chemistry between the couple just leaps off the screen.
It was a meticulously planned occasion but come the day itself, Joanne and Cédric just relaxed into things and had the times of their lives.  Just look at them dancing outside with all of their guests!

Doesn't it love like the most fun, romantic wedding day?

Thanks so much to the fabulous White Balloon Films and the lovely Joanne and Cédric for sharing their beautiful wedding film with us.

Love Wedding Films? We've got a whole gallery full of them. 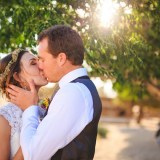 next up
Romantic Western Wedding with Rustic DIY Details

Claire McGowran
Writer
Claire is the former Editor of Bridal Musings. She loves an excuse to try on a veil, has a minor obsession with flower crowns, and enjoys nothing more than curating a killer party playlist.
Share this
@bridalmusings on instagram