The real weddings we feature always bring up a lot of emotions.

Sometimes we well up, sometimes we coo, other times it's squealing, and then of course, there's the occasional wedding envy!

Today's real wedding involved all those emotions, and then some.

Because not only is it so stylish and so sweet, but it also features perhaps the most adorable couple we've ever had on the blog…

This pair of too-cute dachshund pooches are lucky enough to call the talented and creative Danni and Wilfredo Rivera, aka Danfredo Photos + Films, their owners.

After rescuing their second dog, Chelsea, from Little Paws Rescue, Danni and Will got to chatting (over wine!) and thought it might be a novel idea to host a wedding for their pups. Like for real. Complete with cake, flowers, invitations and canine guests.

Before they knew it, Hudson and Chelsea had themselves a wedding planner, Confetti & Co, a venue, Mass Building, a florist, Kate Farley Design and a stationer, Hello, Bird. And that was only the start of it.

When we saw the #hudsonloveschelsea film (at the bottom of the page, you HAVE to watch it!) doing the rounds on social media last week, we just knew we had to show you guys, in case you'd missed it.

So we got in touch with Danfredo Photos + Films, and we were so chuffed when they sent us on some incredible photographs to share too.

Not only is this the most fun wedding ever, but it's pretty gorgeous too. We reckon there'll be plenty of human brides and grooms stealing Hudson and Chelsea's wedding day style…

#hudsonloveschelsea from Danni Rivera on Vimeo.

Holy moly, that's cute. And so chic! I'd totally steal that tablescaping and ceremony decor, and as for asking your guests to sit on floor cushions? How bijou! I especially love the bulldog (maid of honour, perhaps?) who hit the dancefloor!

Thanks so much to Danfredo Photos + Films, and all their awesome vendors for sharing this (very real!) wedding with us!

Danni and Will say they're currently booking human nuptials for 2015 and are running a promotion on 2015 destination weddings, with a flat $1000 travel fee for weddings with both of them to travel if you book before the end of the year – (maybe, if you ask nicely, they'll bring the hounds!) 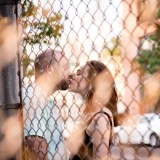 next up
Cool Brooklyn Engagement Session

How To Refresh Your Search for Wedding Inspiration