To photographers, every wedding they capture holds a special place in their heart. After all, they've spent one of the most important days in a lifetime with a couple and their family, capturing tears, laughter and intimate moments.

But for one of our favourite photographers, Tomasz Wagner Photography & Film (whose work we've featured before, and you simply MUST see!) this wedding was even more special than usual.

He spent a week with Myriam, Reza and their families, becoming almost one of the guests as they celebrated their destination wedding in Morocco.

And from a romantic first look at sunset, to a beautiful Afghan ceremony at night, ping pong into the wee hours, and an elopement-style shoot the next day, he has captured every moment, candidly, beautifully and atmospherically as if he was part of the family…

Myriam and Reza’s destination wedding in Morocco was incredible in many ways.

An adventure in a place they had both never been to added to the excitement, but it was their simple intention of gathering their families together to explore and let loose a bit that made this a particularly special occasion.

Myriam and Reza lead exceptionally busy lives as doctor and engineer, respectively, and with the Atlantic Ocean between them at the time (Myriam lives in Canada; Reza lives in Germany) it made sense to get married in a location that would soon represent a time when two families bonded even further over impromptu boot camps, explorations around North Africa, and French-inspired Moroccan food.

Sometimes it’s the most serendipitous of meetings that literally take you places and truth be told, I’m often at my best when I get to combine my two loves of travel and weddings.

In this case it all happened quite quickly: on a summer’s evening in downtown Vancouver, I met with Myriam to discuss their wedding plans and to finalize my involvement as their photographer.

A few months later my girlfriend, Amy, and I flew across the Atlantic to land in Casablanca, the first city on our three week itinerary in Morocco. We spent the first two weeks traveling the country before arriving at the Villa President just outside of Marrakech.

Our timing was spot on: as soon as we had unloaded our bags from the taxi, the first of the shuttles from the airport arrived and with it, half of the wedding guests. The other half arrived later that evening and all together we were an intimate party of fourteen.

We spent nearly a week with Myriam, Reza, and their families at the Villa President. Most days were spent bonding over breakfast and relaxing around the pool; at night, we would have a family-style dinner and enjoy several rounds of ping-pong (Myriam played professionally in her youth and was unmatched, except when up against the ping-pong stylings of Reza, though she might dispute this).

As a wedding photographer who had been hired to be there, I had never felt more welcomed, relaxed, and encouraged to become “a part of the family” as I did then.

It wasn’t just Myriam and Reza who kept reminding us; their families immediately made us feel like we were really there to enjoy each other’s company, whether by the pool, in the shuttle on our way to the city, or over delicious food.

It was an incredible honour to say the least, and when the wedding day arrived, it was if I had known these two and their families for much longer than those seven days.

The staff at Villa President prepared all the food and drink that morning in their state of the art but still homely kitchen; and with Amy’s assistance they made haste with the setup of the wedding reception.

All of the family members gathered around Myriam and Reza as they spoke words of wisdom and of love. This is a regular thing at weddings of course but moments like these never fail to impress and reveal some beautiful and hilarious anecdotes about the newly married couple and their decision to be together.

Following the Afghan wedding ceremony and a recessional by a Moroccan quartet, Myriam and Reza invited us to enjoy ourselves over dinner.

What actually really delighted me was the lack of a schedule; we did everything as it came along or if we felt the time was ripe.

We lit paper lanterns as the moon held its brilliant glow and explored the Moroccan countryside with new eyes.

The opportunity to bond further with these two during our elopement-style shoot one day later was brilliant in and of itself and I’m happy they were up for the jaunt through the red and green landscape of the Tizi n’Tichka Pass.

Everything was an adventure and it’s opportunities like these that stay with me for years to come.

Wow. This is just breathtaking? Tomasz Wagner's photography just gets us every time, it's so romantic and epic – like something out of a movie.

And a special week away with your closest family in a gorgeous setting, that's what a destination wedding is all about.

Thanks so much to Tomasz Wagner Photography and the gorgeous Myriam and Reza for sharing their intimate Moroccan wedding with us. 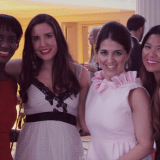 next up
The Morning After The Night Before! The Wedding Blog Awards 2014