This wedding film is awesome!

Chaden & Chadi married on one of the most beautiful Greek islands, achingly stunning Mykonos with a traditional Greek wedding that was stylish, sensual and super fun.

And their wedding film, by Marco Caputo Films captured all the romance, atmosphere and festivity of the setting, the couple, and their magical wedding day.

Normally based in Italy, you may remember Marco Caputo's work from this breath-taking Amalfi Coast wedding which we featured a few months back.

Sticking with his signature style he creates films that make you feel like you're really there, with every moment beautifully shot, from the setting and the details, to intimate moments between the couple to bouts of laughter among the guests.

If you've ever considered a big fat Greek wedding, this stunning film might seal the deal!

Isn't it gorgeous? I love how it goes from atmospheric and romantic at the start, to wild and fun at the end – just like any great wedding!

Thanks so much to Marko Caputo Films and of course the gorgeous Chaden and Chadi for sharing their beautiful Mykonos wedding with us.

For more beautiful wedding videography, spend some time in our Film Gallery. 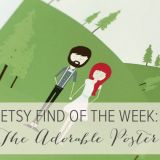 next up
Etsy Find of the Week: The Adorable Wedding Poster