When it comes to choosing where to go on honeymoon, many couples are seeking out new experiences and a wild adventure – after all, that's kind of what marriage is, right?

And when it comes to adventures, it doesn't get much wilder than a safari.

Remote destinations, exotic animals, breathtaking landscapes, and a touch of danger; a safari honeymoon is madly romantic and totally unforgettable.

And while Africa is the obvious choice for a safari, there are so many other parts of the world that boast the same awe-inspiring locations, incredible creatures, and captivating lodges. While in Africa itself, there are lesser-tapped pockets that provide the most magical experiences.

The key to choosing a great safari adventure is to try to go as native as possible, choose sustainable lodges and camps, authentic guides, and look for unique experiences, that don't exploit the animals, or the resources of the place you visit – while adding a little honeymoon luxury of course!

With that in mind, we've selected eight of the most spine-tinglingly beautiful places on earth, with lions and tigers and bears (oh my!) on their doorsteps…

With the likes of Kruger National Park, one of the largest game reserves in Africa, the beautiful Eastern Cape game reserves, and countless conservations boasting the big five, South Africa is one of the most exciting and diverse safari destinations. Pair it up with a city stay in Cape Town or a winery-pitstop road trip on the Garden Route.

Sleep: Elizabeth stayed at Vuyani Safari Lodge on her South African travels and said that the rangers were great, the food was delicious, and it had a wonderfully intimate atmosphere – they only have 14 guests (max) at a time. The pool overlooking the bush was perfect for chilling out in after a morning on the lookout for lions and rhinos. Makanyane has incredible accommodation on the Madikwe Game Reserve and Sabi Sand Reserve have a wide selection of spectacular honeymoon backdrops at the edge of Kruger.

Season: May to October is the best time for game spotting in South Africa.

Home to the breathtaking Serengeti, Tanzania is the place to witness The Great Migration. With a dazzling selection of landscapes, from rolling plains to dense bushland, rugged wetlands, and the dramatic volcanic backdrop of the Ngorongoro Crater – this diverse East African country offers the most memorable honeymoon experiences. Finish it off with a beach break in Zanzibar to unwind from your adventures.

See: Those epic herds of wildebeest on the move, tree-climbing lions by Lake Manyara, along with gazelle, zebra, big cats and of course, the national animal of Tanzania, the giraffe.

Sleep: Ngorongoro Crater Lodge is a stunning setting on the crater for taking in the immensity of the landscape and dining with breathtaking views, Serena Mivumo River Lodge is a romantic and isolated hideaway, while the Lamai Serengeti is a dreamy, breezy spot to take in The Great Migration with a front row seat.

Season: Tanzania is a beautiful, year-round destination. As the wildebeest make their migration, they can be spotted in different locations, at different times of the year, so be sure to check they'll be passing by while you're there.

Photo via The Bison

From a snow leopard safari in the Hemis National Park in Kashmir, to tiger spotting on the rugged plains of Bandhavgarh National Park in Central India, and wild elephant watching in lush Southern jungles in Kerala, there is a world's worth of wildlife to explore across this incredible subcontinent.

Sleep: For an authentic safari lodge experience close to the tigers, King's Lodge in Bandhavgarh has the full package, head south to spot wild elephants, and stay in The Bison on the Kabini Reserve. For tracking snow leopards, homestays are the only way to do it, go with a sustainable organisation like Karma Quests.

Season: When to go to India depends on what you'd like to see, March to May is the best time to spot tigers, while lusher months, November to April are good times to see elephants in the wild.

Brazil might seem to be all about the beaches, but with the Amazon representing over half of the world's rainforest and the Pantanal boasting the world's largest, and most unusual wetland, this country is not to be overlooked for a unique and unforgettable safari honeymoon.

See: From the brightest birds to flesheating fish, the Amazon boasts the most diverse inhabitants on the planet, highlights include monkeys, macaws, dolphins, piranhas, jaguar, cougars and anacondas. On the Pantanal, you can expect to see rare deer, wolves, eagles and iguanas among the thousands of species that call the region home.

Sleep: For a sophisticated place to rest your head in the Pantanal, Caiman Ecological Refuge is a wildlife haven in the heart of the region. As for the Amazon, Anavilhanas Jungle Lodge offers rare comforts by the iconic Anavilhanas Archipelago, while Cristalino Jungle Lodge further South, offers a romantic sanctuary amid incredible wildlife.

Season: June is a good time to visit the Amazon, as the rains ease off, but the forest is still flooded, while for those who want to explore by foot, the dry weather in October is the best time to hike.

Enjoy a real life Gorillas in the Mist experience on your honeymoon, Rwanda is a lesser explored emerald in the heart of East Africa's safari belt. Lush, green and brimming with wildlife, this dramatic landscape of volcanoes, lakes and tea plantations will capture your imagination.

See: When it comes to Rwanda, it's all about the gorillas, but you'll also spot chimpanzees and other monkeys, along with bats, cats, and even some lions, giraffes and elephants.

Sleep: Nyungwe Forest Lodge is perhaps one of the most reknowned places to stay in Rwanda for honeymoons, Sabiyano Silverback Lodge has a beautiful perch on the edge of Volcano National Park and choose Ruzizi Tented Lodge for somewhere eco-friendly and atmospheric on the shores of Lake Ihema.

Season: The best time to visit Rwanda is June to September, making it a perfect honeymoon spot for summer weddings.

Photo via Luxury Lodges of Australia

A country with multiple personalities and infinite landscapes, Australia is perhaps not an obvious choice for a safari, but on further inspection, a natural one. What it lacks in lions and tigers, it makes up for in indigenous species of its own, along with incredible coastlines, captivating plains, and rainforests to rival the Amazon.

See: The wildlife of Australia is as diverse and vast as the country itself. Of course you'll see the iconic kangaroos, koalas, and emus, along with platypus, echidna, wombats, dingos and camels. And don't forget incredible marine wildlife, stunning bird population, and the infamous snakes and insects.

Sleep: Longitude 131 is the number one place to stay near Uluru with unrivalled views of the iconic red rock. Explore Western Australia's rugged wilderness from the comfort of El Questro Homestead. For a jungle escape, Silky Oaks Lodge will get you up close to nature and for a real safari experience in New South Wales, try Paperbark Camp.

Season: There's no bad time to visit Australia but for sunny, yet comfortable weather, Spring and Autumn are the times to go.

If you were following Elizabeth's Sabah posts over the last few months, you'll know that the island of Borneo, split between Malaysia and Brunei and Indonesia, is a veritable treasure trove of wildlife. Stunning resorts, tropical temperatures, and pristine waters make this a great place to combine a safari adventure with a paradise island escape.

See: Borneo's diverse ecology makes it home to some remarkable wildlife, most iconic perhaps are the orangutans, but you'll also find elephants, leopard cats, giant insects, and one of the most dazzling array of birds on the planet.

Sleep: For unadulterated luxury, stay at Gaya Island Resort (it's your honeymoon after all). Sukau Rainforest Lodge is a David Attenborough favourite, so a no-brainer for wildlife enthusiasts in Malaysia, while Shangri-La’s Rasa Ria Resort in Kota Kinabalu has its very own orangutan nature reserve. For incredible night walks, stay in lush Brunei's Ulu Ulu Resort.

Season: For orangutan-spotting, the best time to visit Borneo is April and November, when the trees are fruiting on lower ground.

Salt pans, deserts, canyons, beaches and lush oases, Namibia, nestled in the south west of Africa, is a stunning, and often overlooked honeymoon safari destination, with a very different backdrop to its East African counterparts. Etosha National Park, is one of the oldest game reserves in the world, the famous Skeleton Coast is a haunting place to explore, while the awe-inspiring red sands of Sossusvlei in Namib-Naukluft National Park are home to the iconic Deadvlei.

See: With one of the most unique landscapes on the planet, you'll find zebra, elephants, oryx, cheetahs, meerkats, lions, the endangered black rhino, flamingos, impala, and even seals.

Sleep: In Sossusvlei, Sossus Dune Lodge is an enchanting village-style resort to take in breathtaking sand dune sunsets, while Wolwedans Boulders Camp is a beautifully isolated backdrop to see the stars. For a luxury stay in Etosha, honeymooners love Ongava Tented Camp, while on the Skeleton Coast, Serra Cafema Camp is as remote as it gets.

Season: While Namibia is good to visit year-round, May to September will see the biggest clusters of animals by the waterholes.

Oh wow. Each one is so spectacular, it's impossible to choose! I'm definitely adding Namibia and Brazil to the bucket list though.

A safari is a great honeymoon to pair up with a city or beach break too, and most honeymoon specialists will be able to advice you on resorts within easy reach.

Would you consider a safari honeymoon? Which was your favourite? We'd love to hear your thoughts in the comments below. Oh, and don't forget to check out Bené's safari packing guide here.

Planning your trip of a lifetime? Get more unforgettable honeymoon ideas here. 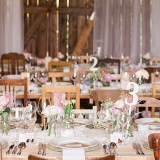 next up
The Dos and Don'ts of a DIY Wedding

Honeymoon In Paris: Where to Stay, Eat, Go (And Find The Best Macaroons!)

You Need To Check Out These Gorgeous Bridal Hairstyles!