Engagement shoots are so fun, and they're a great opportunity to visit some of your very favourite places as a couple, and capture a few gorgeous snaps while you're there.

Which is exactly why Taylor & Bryan decided to take their engagement shoot with Anna Grace Photography all the way to the Caribbean.

St. John, in the US Virgin Islands, is a place that the couple have holidayed every year of their relationship.

So to include this beloved island in their Virginia wedding in September, it became the perfect backdrop for this travel-loving couple to celebrate their engagement.

With super chic outfit changes, fun on the sand, kisses in the sea, and a snapshot into the laidback Caribbean lifestyle (we'll take a hammock, please) this shoot doesn't just give us so many ideas for an engagement shoot, but some major honeymoon inspiration too.

Before you scroll down to see their fab pics, read a little more from the happy couple about how they fell in love…

We met during their senior year of high school and immediately became really good friends. We went to prom together (just as friends) and stayed close all throughout college.

It wasn’t until after they graduated college that they officially started dating. We dated four and a half years before Bryan popped the big question.

The day after this past Valentine's Day, we went on a cruise with Bryan's family. On the second night of the cruise, Bryan booked a late romantic dinner and we spent the evening sipping cocktails. On the way to dinner, we stopped at a photographer station, and took a few photos.

Bryan told the photographer that he had one more shot that he wanted to take, and started getting down on one knee. The ring box was wedged into the tiny jacket pocket he had hidden it in, and digging it out took the longest five seconds of Bryan's life, but when he was done, Taylor agreed to be his wife.

Bryan had it planned so that the next day, Taylor had cell service in San Juan so she could call her family. We spent the day taking photos at the incredible fortress there and had another five days of vacation to enjoy being engaged.

Thanks so much to Anna Grace Photography, and of course Taylor & Bryan for sharing their engagement shoot with us.

Get more unique ideas for your own Engagement Shoot. 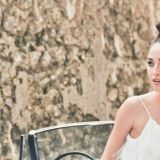 next up
Trend Alert: Top Knot Hair Styles for Your Wedding (for both brides and grooms)