So, it's getting close. Just over two weeks now to go, and Marko and I are pretty freakin' excited. I was away for the weekend, and since I've been back, something has changed. The countdown is officially on.

Marko and I are in the weirdest, giddiest mood, and while there's a few little bits to get done, it kind of feels like we're too excited to even think about logistics.

Today for my Real Bride Diary (I was going to say penultimate, but I won't be going anywhere for a while!), I'm going to share a little bit about our wedding ceremony, the one aspect of the day that still makes me feel a bit sick.

Not because I think something's going to go wrong, but because I'm terrified I won't be able to get through it without destroying my make-up.

– My current obsession: A fresh pimple break-out that I'm monitoring by the hour.

– Marko’s current obsession: DIY confetti. Our floors are littered with the stuff.

About six years ago, long before we ever got engaged, Marko and I decided that whenever the day came, we wanted our friend Dan to be our officiant.

Dan is one of the most articulate people we know, he works in theatre so he knows how to bring an audience on-side, and he means a lot to both of us. So, the very first thing we did when we got engaged, before we picked a venue or set a date, was to ask Dan to be our celebrant.

We were chuffed he said yes!

It's so important to us to have someone we know leading our ceremony, and having Dan with us has dictated the tone and feel of it, it won't just be about me and Marko making it official (which we're actually doing with a civil ceremony a few days before), it's about having all of our friends and family there to witness it.

When we first sat down with Dan, he suggested we needed some kind of unifying moment early in the ceremony, to put everyone at ease, especially as for many of our relatives, this may be their first non-church wedding.

So, we'll be having a little club initiation, so everyone knows they're in our ‘wedding gang' and that we're delighted to have them there.

From there, we'll have readings and music (which I'll get to below), working our way to our vows. Although they're not really vows. We'll each make a short speech about what makes the other one so great, and then instead of making a series of promises, Marko and I will make one, as we exchange our rings.

“With this ring, I promise to be your friend, your family, and everything you need me to be.”

We came up with that line together, and we figured it pretty much sums up everything we want to say.

As for those mini speeches, I haven't been able to get through mine without crying just yet, so, I'm not holding out a lot of hope.

I went into more detail on this in the decor post, but our ceremony will be held in an old outhouse/milking shed in Kilruddery that no longer has a roof.

Our guests will mostly be standing, though we'll have some hay bales and chairs for our immediate family and some older guests.

Our only real decor is our backdrop which will be made from painter's drop cloth (an idea I stole from this real wedding) and garland swagging over it.

We'll have ice-cream on arrival, with handkerchiefs for the criers (like me!), and just simple booklets we made up ourselves.

We're a little bit worried that the space won't be big enough to fit all our guests, but if not, there's a larger area just outside, that we can move to quite easily.

We're hoping for sunshine and if there's just a light drizzle we'll have umbrellas, but if it starts to pour, there's an area under some cover we can go to as well!

As I mentioned in my music post, our very talented friends, Celina, Brendan, and Sean will be doing the music at our wedding.

For the entrance, Celina and Brendan will sing ‘A Waltz for a Night‘ by Julie Delpy from the film Before Sunset. It's both a song and a film we love, and the waltz pace is perfect for a processional.

During the ceremony, Brendan will sing ‘Higher Love‘ a cover by James Vincent McMorrow, who we were listening to the night we got engaged and who we've seen live A LOT, and ‘Sweet Disposition‘ by The Temper Trap which reminds us of our travels.

Our friend Sean, who is a classical tenor, will sing Una Furtiva Lagrima an incredibly beautiful song from the opera L'elisir D'amore.

And finally, to sing us out, we'll have an upbeat recessional song – though I'm not going to reveal that just yet – we've got to have some surprises for our guests!

We're having three readings at our wedding, read by our close friends (who also happen to be beautiful orators) Naomi, Claire and Alan.

I do want to hold a little bit back, so I'll write a post on the full readings after the wedding, but I figured I should share one of them today.

This reading was a late addition, but as soon as I'd read it, I knew we needed to include it. And while it's a little goofy, I knew Marko would love it too.

It's a story from Humans of New York, it was a two part post about a couple who'd just got engaged, and had the loveliest proposal story (which I shared on the Bridal Musings Facebook page at the time!).

Then they shared this story…

One night she asked me to tell her a bedtime story. And I started telling her this long story about Finnegan the Moose.

Finnegan was a very dignified moose. But one day a crazy goose named Reginald came and sat on his head.

Reginald was a very exciting goose. She was always making bold proclamations, and suggesting crazy adventures, and her tongue was always hanging out of her mouth.

Finnegan would always do whatever Reginald suggested. And he’d pretend that he understood her even when she didn’t make sense.

Because before Reginald landed on his head, Finnegan’s life was a little boring. It wasn’t a bad life. It was a normal moose life.

He just hadn’t met his best friend yet. And he didn’t even know she was out there.

Isn't it sweet! It still makes me smile, even after dozens of read-throughs.

My Top Tips For Planning Your Ceremony

Marko and I bumped into the awesome officiant and ceremony blogger, Natasha Johnson of Engaged & Ready a few months back and she shared some great wisdom on creating unique wedding ceremonies, which you can read here.

But I figured while I'm waxing on about all things ceremonial, I'd share a few insights that I've picked up while planning our own one too.

Toss Out the Rule Book – obviously this doesn't apply to religious ceremonies, but if you're free to create your own ceremony, don't feel like you have to follow a structure you're used to.

Make it Meaningful – don't just Google wedding readings and pick the first one you find, spend time together doing research and find songs and music that mean something to you.

Involve your Guests – from having a unifying moment, to choosing family and friends to read or perform, getting people involved adds to a more authentic experience.

Be Comfortable – There's so much about weddings that make Marko and I feel a little awkward (like a first dance!) and the same went for saying conventional vows or doing a unity element like hand tying or sand pouring for our ceremony. So, we just left them out. Avoid anything that feels too forced, and make sure you don't feel pressured to keep something in, just because it's tradition.

Keep it Short – Okay, so I can't really preach, because I added an extra song and an extra reading in because I just couldn't whittle things down, but our ceremony is still only about 25 minutes long. Go much over a half an hour though, and you might just lose the attention of your guests.

So, what do you think?

I'd love you guys to share your thoughts and tips on ceremony planning in the comments below, be sure to read Natasha's guest post on making your ceremony unique, and I'll catch you next week for one last preview post ahead of the big day, and this time it's all about… The Groom!

Read back over the rest of my Real Bride Diaries. 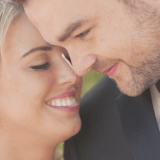 next up
Intimate Vineyard Wedding Film (That Will Make You Cry)