Hi guys! Claire here, with my last ‘normal service' planning post before the wedding (though I'm sure there will be a few updates next week!)

You've heard my take on the decor, the venue, the catering and the music, and while I've tried my best to use ‘we' instead of ‘I', let's be honest, my Real Bride Diaries have been pretty one sided.

But thankfully our wedding planning hasn't been.

Marko has been as (if not more so in certain areas) involved in every aspect of planning as I have, and particularly in the last couple of months, he's picked up the slack when I've been over the whole idea of chasing up vendors and planning logistics.

(As I type, he's flattening out my veil before it goes into our suitcase!)

It's a pet hate of mine when I hear a bride talk about her wedding like she's the only one involved. So today, instead of hearing from me, this post is all about Marko.

I sat down for a pre-wedding Q&A with my soon to be mister. And I was pretty chuffed with what he had to say…

My current obsession: Getting everything to fit into our suitcases.

Marko's current obsession: Looking at our Trello to do lists and trying to move as many things into the ‘Done' tab as possible.

This week we're mostly: Flying back to Ireland to get hitched!

Has planning a wedding been like you thought it would be?

There's the obvious big things, the vendors, the venue, the guests but then there's the little things like the gifts for people, the on the day logistics, who's going to be where when, timings, just lots of little things.

What's been your favourite aspect of planning?

It's pretty cool that we've worked for over a year and half and put together this awesome day.

When you look at it, it's a big undertaking, and we've done most of it ourselves.

What's been your least favourite thing about it?

That and running errands.

What are you wearing on your wedding day?

A blue blazer, navy slacks, and delicious leather tan boots. There's a crease in the boots that is supposed to be there, and my mam was freaking out because she thought she'd damaged them and was trying to get it out. But they're meant to be that way.

It was hard to choose what to wear, because I didn't want a two or three piece suit, and at the same time I didn't 100% know what I wanted, so that made it tough. I had a rough idea of what I thought would look good, but then it didn't. Maybe it's a seasonal thing, but most things in the shop were quite similar, so it was a matter of finding which I liked best.

I am definitely excited about what I'm wearing though, it's going to look great. Oh and I have a navy dickie bow with origami kingfishers. I wanted a Game of Thrones bow tie but I was talked down. (Claire here, I did the talking down.)

What do you think I'm wearing?

What does getting married mean to you?

It's just an official way of us celebrating us being us.

Not that it's a formality, but nothing outright is going to change, because we're already living the way we want, it's just going to make it more official.

What part of the day are you most looking forward to?

Why are you not having a best man?

I think from the outset, we'd both said we didn't want to do that (have a bridal party), so I've never thought of my wedding any other way, so I don't feel like I'm missing out on anything.

It's just something we wanted, and it moves away from the traditional formal ceremony.

Really chilled and as unlike a ‘stag' as was possible. We went on boat trip on the Shannon, which is something we do every year, so it just felt like a normal weekend.

It was really casual and felt like the focus wasn't on me, it was just a bunch of mates having a good time.

Tell me about the food at the wedding?

It covers all bases of deliciousness. There's ice-cream on arrival, we've got fish and chip cones and bacon butties for the canapés, and then there's beef brisket for the main. I'm excited.

We knew we wanted a BBQ but we wanted something a bit more special than people just getting a burger for a wedding meal.

How did you choose your venue?

It wasn't hard to pick our venue once we saw it, but it was the last venue we saw, up until that point, there was a lot of back and forth between venues.

Kilruddery is perfect for the vibe we were looking for for the wedding, there's a great outdoor courtyard area, inside is big, rustic, and just has a relaxed feeling to it, as opposed to a hotel function room, where you know you're at a wedding.

What have you planned for the entertainment?

We've put together 18 hours of music on Spotify, which we'll try our hardest to get through.

We knew before we even talked about getting married, that we'd get Attention Bebe, so there was no discussion, we just knew. It's going to be fun.

Claire has got a lot of balloons for the dancefloor.

What are your plans for decorating the venue?

We're going quite minimal with the decor, it's hard to know what are my own thoughts, because Claire uses words like ‘Tuscan', but the main focus is the tables, with herb pots and candles, LOTS of candles.

And then an outside area with festoon lighting, (if I can get the stands built – fingers crossed).

As a groom, do you feel as involved in the wedding planning?

Yes, I'm absolutely as into the wedding as Claire.

As much as we're completely on the same page, we have different approaches. Because Claire works in weddings, she's always thinking about it, but it's never been as if I don't care.

Claire might have come up with ideas, but we both decided on everything together.

What's your best advice for other couples?

Try to get as many big things out of the way early as you can. Try not to stress or worry over things that you might not be able to get sorted. If little details fall through, only the two of you will notice, and everyone will have a great day either way.

Be crystal clear about what you want with your venue, and don't let them avoid giving you direct answers to your questions.

Try to have proper sit-down planning sessions together, where you really get into it, because then it gets you really excited.

What are your honeymoon plans?

We're not going to Italy. As was the plan until two months ago. We're going to Belize.

We didn't want a resort you just sit in for two weeks, because we knew we'd get bored, but at the same time we didn't want a holiday where we were active 24/7, so we went for a bit of both.

We're going to chill out on the beach for some parts, and explore the jungle for others.

Are you nervous about the wedding?

Yes. Not about getting married, just the ceremony, where the focus and attention will be on us.

Even though I teach for a living, and talk in front of kids all the time, it's so different when it's a massive PDA in front of your friends and family.

Isn't he swell? You can see why I'm going to lock him down.

Grooms, I'd love to hear more of your thoughts on the planning process, don't forget to hit us up on social media and leave your thoughts in the comments.

Until next time (when I'll be very nearly married!), Claire x

Check out the rest of my Real Bride Diaries. 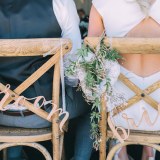 next up
32 Gorgeous Chair Ideas for Weddings

Real Bride Diary: How We Chose Our Wedding Food (And Tips for Planning Your Menu)

Top Ten Ways to Save Money on Your Wedding (Without Anybody Noticing!)

Pro Tips To Keep Things Flowing On Your Wedding Day