Yesterday I posted the trailer of a brand new wedding film coming out this year called ‘Bridesmaids’. If you missed it, click here.  It’s set to be a female version of ‘The Hangover’. But I just can’t decide if it looks really funny or really awful…what do you think?! (Either way, I will definitely be watching it. I hear the words ‘Bridesmaids’ or ‘Wedding’ and I’m on it!) I can’t help it, I LOVE wedding films! This got me thinking about wedding films and which ones I tend to watch over and over again!

Here is a countdown of my favourite wedding films…

10 True Romance (1993) – Starring Christian Slayter & Patricia Arquette It’s not the most traditionally romantic love story-the star crossed lovers are a prostitute and a drug dealer/thief – but it’s a brilliant film! I love it even more after hearing the cheesy tag line from the trailer: Imagine that deep, gravelly, dramatic American trailer voice…’Not since Bonnie and Clyde have two people been so good at being bad!’

9 Muriel’s Wedding (1994) – Starring Toni Collette & Daniel Lapaine This Australian film is hilarious and full of crazy characters. Muriel comes from a small town called ‘Porpoise Spit’, no wonder she wants to escape into a fantasy world of ABBA!

To read an interesting interview with the costume designer about the wedding dresses, click here.

7 27 Dresses (2008) Starring Katherine Heigl & James Marsden Jane is always the bridesmaid never the bride! I absolutely love the scene when she tries on all her hideous bridesmaid’s dresses from her closet!

6 The Wedding Singer (1994) – Starring Adam Sandler & Drew Barrymore There’s a rocking 80s soundtrack and cringe worthy fashion, not to mention a rapping pensioner! What more could you ask for?

5 The Hangover (2009) – Starring Bradley Cooper & Zach Galifianakis This film had Zee and I in stitches! (In fact, I think The Hangover and True Romance are the only films he’s seen from my list!) This film documents the craziest bachelor party in the World ever. Ever ever!

4 Monsoon Wedding (2001) – Starring Vasundhara Das & Parvin Dabas The colours and characters are so rich and vibrant in this film. It’s such an endearing and beautifully captured film. The image below is such a touching moment when the ‘fool’ of the film offers his heart to the girl he has been loving from afar…awwwww.

3 The Notebook (2004) – Starring Ryan Gosling & Rachel McAdams The most romantic movie I have ever seen. Not much ‘weddingy stuff’ but a shed load of love in all it’s forms. Just look at that image…It’s epic love.

2 Ma Ma Mia (2008) – Starring Meryl Streep, Pierce Brosnan & Amanda Seyfried Such a musical extravaganza of a film! I adore the wedding transport, a donkey slowly clip clopping it’s way up the windy mountainside and the venue, a tiny, quaint church at the top of the mountain!

1 Father of the Bride (1991) – Starring Steve Martin & Diane Keaton The older I get, the more I empathize with Steve Martin’s character. This film is just so heart-warming I absolutely love it and have done since I was little. (Although the Freudian slip ‘drive carefully and don’t forget to fasten your condom’ went completely over my head for many, many years!)

*Update ~ Bridesmaids might just topple the 80s classic off the top spot ~ it’s such a funny movie! See my review here. *

Damn, I forgot My Big Fat Greek Wedding…I love that film too by the way! I’m sure there’s lots of fantastic wedding films I’ve missed off my list or haven’t seen. Do share your recommendations (especially pre 1990s films!) Any vintage classics we should be watching? 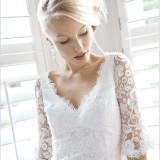 Intimate Vineyard Wedding Film (That Will Make You Cry)