This wedding film has to be one of the most romantic we’ve featured in a long time.

Meegan & Dennis tied the knot with an intimate garden ceremony in the French countryside, but not before an epic photo session in front of some of Paris’ most iconic landmarks.

Planned by Fête in France, with both the video and photography captured by Alisabeth Von Presley, we’ll be sharing the full story of their day a little later on. But first up, we just had to drop in with their stunning film.

It’s pretty dreamy – and has one of the best songs ever as its soundtrack! – so enjoy! 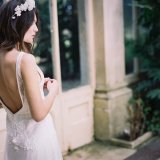