It was during my first long walk exploring ‘The City' that I first laid eyes on San Francisco city hall, all white and gold and glistening in the sunlight. And just as I knew it would be, from the iconic images of weddings past and present, it is by far the most beautiful city hall I've ever seen in my life.

From the grand, ceiling of the Rotunda to the sweeping staircases, ornate marble floors and those iconic gilded doors leading onto the streets of the city, where thousands of couples have taken their first married steps. It's all so darn glamourous.

The fact that Marilyn Monroe and Joe DiMaggio got married there just adds to the glam factor!

I saw San Francisco city hall in person that sunny day back in March but I'd been dreaming about SF city hall weddings long before, thanks to this stunning image by Angi Welsch and Modern 8 Films beautiful wedding film via Style Me Pretty back in 2011.

I'm so thrilled to be able to share Modern 8 Films incredible film of Jason and Yvonne's wedding with you today as my little farewell to San Francisco.

Jason and Yvonne had a beautifully simple wedding (after all who needs fancy florals and decor when you get married in such an iconic venue?) and Yvonne's vintage style makes my heart skip a beat.

This film is full of the sweetest moments, such as Jason and Yvonne's first kiss as husband and wife, where Yvonne affectionately rubs off her red lipstick which had transferred onto Jason's lips and an impromptu stop at a pet shop to admire puppies. (Yes puppies!)

The timelapse footage of the fog rolling over the Golden Gate Bridge and sweeping shots of city hall's neoclassical walls and arches make me miss San Francisco like crazy.

Enjoy this glimpse into Jason and Yvonne's beautiful day but be warned, this film may make just make you want to pack in all your fancy wedding plans and elope in San Francisco!

ps. I don't secretly work for the San francisco tourist board.

pps. If you missed Modern 8 Film's Death Valley Campervan Wedding Film last week, you really must check it out. It's unreal! 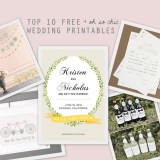 next up
Top 10 Free (& Oh So Chic) Wedding Printables

Blessing Of The Hands: A Classic Wedding Ceremony Reading