Ever since I featured this pomtastic wedding…

These little wooly balls have such retro charm, I bet most of you reading made them at school didn’t you? Or at home if you have a crafty Martha Stewart esque family member.

Yes they are DIY by nature ~ you can make them using cardboard circles, forks or even your fingers but the thought of DIYing a whole garland full of pom poms or enough mini pom poms to use as confetti is exhausting!

You could hold a craft night with your bridesmaids/friends/family and do a pom pom blitz or make a note on your wedding invite asking your guests to make a pom pom and send it to you. Or you could always buy them ready made and good to go.

Etsy is brimming with yarn pom poms, from garlands to cake toppers. So you can still have that handmade feel without literally hand making every single pom pom.

Here are some of my favourites on Etsy:

Yarn (in a selection of your chosen colours)

If you are planning on making lots of pom poms (or time is of the essence) I highly recommend investing in a pom pom maker. They’re inexpensive and come in a range of sizes so you make extra large, large, medium or mini pom poms. There’s even fancy heart pom pom makers! Check out Clover on Amazon for a good quality selection.

There are lots of DIY yarn pom pom tutorials out there, here are some of my favourites using the different resources mentioned above.

~ A tutorial by Honestly WTF using a pom pom maker.

~ A visual tutorial on The Twinery demonstrating how to use a fork to make mini pom poms.

~ Links to quick and easy ‘use your fingers’ photo tutorials on Offbeat Bride and Project Wedding.

And below is a fab video tutorial from Creature Comforts:

Once you have the actual pom pom making down you can use them in lots of different ways by simply attaching them to string or fish wire / lollipop sticks / wooden dowels or using them as a cute topper on gifts and favour bags.

Here’s lots of fun ideas on how to incorporate yarn pom poms into your wedding:

Use them in centerpieces or as drink decor, create garlands using different size poms, hang them vertically to create interesting table decor or use them as photobooth backdrops.

A pom pom bouquet is a fun alternative to a traditional floral bouquet that’ll make a pretty addition to any vase once the wedding’s been and gone.

And I love the idea of a cute pom pom as an escort card which guests can take home at the end of the night while soft, fluffy, mini pom poms are perfect to use as confetti or for extra fun on the dancefloor!

I’d love to hear your ideas!

How would you use pom poms at a wedding or party (or just for the fun it)?

I think this is one project I’d DIY as it’s one of those projects that doesn’t require a lot of concentration so you can do it while you’re watching TV or on the phone. How about you? Would you BUY or DIY? 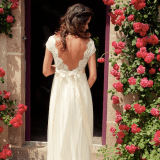 next up
A Colourful, Boho Wedding in France: Hearts, Ducks & Daisies

How To Create A Wedding Inspiration Board Online

Best of 2015: Our Favourite Styled Shoots of the Year