It was the big move yesterday, dear readers!

I've really been craving routine and that sense of feeling settled so I'm thrilled to finally have a place to call our own (for the next few months at least) and to leave all that scary/frustrating fire and water damage business behind us. Now I can finally, finally get back to blogging proper.

Our new flat is a loft apartment in an industrial area of Hackney so it's official, I'm an East London girl. (Having been ‘Westside till I die' for the past 5 years.)

Everyone I pass on the streets here is super trendy, sporting mismatched, vintage clothing and they all seem to wear hats and ride bicycles! (For my US readers, think ‘Portlandia'.)

So it's only fitting that today I feature this gorgeous shoot featuring one seriously stylish, loved up couple frolicking about in Brick Lane (the famous East London hub of awesomeness). Oh and the photographer is none other than film photographer extraordinaire, Ashton Jean Pierre.

The main objectives of the workshop were for Ashton to share how he started in photography, his style, why he shoots film and to explore how to break down barriers.

It was also a chance for photographers to capture couples in love amidst a bustling, urban environment and the results are absolutely beautiful (or bokehiful) don't you think?

Aren't Abi and Jack such a cute couple*?!

Here's what Abi had to say about the shoot:

Ashton is so friendly and positive, he made Jack and I feel at ease instantly with his warming smile. He took so many pictures that it became second nature to have a camera in front of us whilst being natural. The images from the shoot are beautiful and I will treasure them for the rest of my life. A glorious day.

Having been lucky enough to do a shoot with Ashton (you can take a peek here) I agree wholeheartedly with Abi. He is a genuinely lovely and outrageously talented person!

If you'd like to see more of Ashton's beautiful photography, be sure to check out Sophie and Robert's retro cinema themed engagement shoot and their quirky, English country wedding. And pop along to his blog to see his latest work.

*For those of you loving Abi and Jack's style,  Abi's dress was by Monsoon and her shoes were from ‘COW', a vintage shop in Birmingham. Jack wore a Primark shirt and his jeans, bow-tie and braces were from HnM. 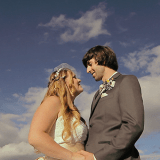 next up
A Magnificent Mountaintop Wedding Film By Zinchuk Films