Today we have a real treat in store, for anyone who ever dreamed of having a wedding fit for a princess.

It’s very rare we feature real weddings without showing a plethora of pictures of the happy couple. Give us some shots of a blushing bride and a choked-up groom any day. But when it comes to this real life royal wedding, well, we just had to make an exception.

From plush gilded tableware and lavish lace adornments to an abundance of pink roses and decadent favours shipped in from Europe, this wedding is a feast of beautiful details and palatial elegance.

This very special celebration was photographed in stunning detal by Jacob & Pauline Photography. We’ll let them tell you about how they came to find themselves capturing a Qatari wedding…

“When we were asked by Qatar royalty to shoot one of their weddings, we were shocked. A royal wedding? What a privilege! But there was a catch – it was in four days’ time.

That’s right, in just under one hundred hours we were expected to pack up and go! After a few chats with the bride – who happened to be daughter of Qatari Sheikh no less – we had our visas sorted and boarded a flight to Doha.

You’ll see from the photos there was no expense spared on the day. According to religious customs, there are actually two weddings; one for the women to attend, and another for the men.

You’ll also notice there are no photos of the bride, groom or guests. This is again, according to tradition, and something we were only too happy to observe.”

“It was great learning so much about the culture and really getting immersed in the day.

Pauline spent about four hours taking shot after shot of the bride getting ready. Looking back, they are some of the best pictures she’s ever taken.

The bride was comfortable, happy and laughing. It was truly amazing to be able to capture such an intimate setting and was wonderful that there was so much trust.

The venue was a mini palace, built by her father as a wedding gift which was just astounding.

There were around 700 female guests in attendance, all decked in designer clothes, gorgeous jewels and looking as pristine and beautiful as could be. In the background, an army of waitresses prepared and served a banquet fit for the royalty that was eating it!”

“After the party had feasted on the delicious food, it was all about dancing, having fun and congratulating the happy bride. Everyone was just enjoying the day, and we managed to capture such a wonderful atmosphere.

When the three metre high cake was brought in by six waitresses there was much cheering, which was wonderful.

After the bride had thrown the bouquet, we hopped into a car to take more photos of the bride and groom at their own private residence.

We’re always more than happy to take part in a destination wedding, but this celebration really was something else – we’ll never, ever forget it.

The bride was stunning, and one of the most polite, humble people we’d ever met which, given the wealth on display, was so wonderful.”

It’s like something out of our dreams. Or at the very least from the set of a movie.

I love how it’s so sumptuous and extravagant, yet at the same time pretty and delicate. And while we may never afford our very own “Wedding Palace”, there are lots of ideas in there that we could apply to our own less-than-regal nuptials.

Special thanks to the royal couple for letting us have a sneak peak behind their breathtaking day. And congratulations to Pauline & Jacob for being asked to capture such a unique and incredible wedding. 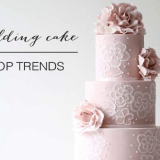 next up
Three-Tiered and Trendy; Chic Wedding Cakes For 2014

Best of 2015: Our Favourite Real Weddings of the Year