An Adorably Chic Save The Date Shoot and The Coolest Wedding Fair, Ever!

Today we have a fun, romantic, and beautifully photographed Save the Date shoot – for a real/fake wedding – that you’re invited to!

Knot Crashers is a brand new kind of a wedding fair. California couples planning their own big days will crash a real life couple’s faux wedding, and see vendors doing their thing in their natural habitat. It’s all being organised by the event design and catering team from Zest It Up.

And (real) couple, Laurie and Lance have created this gorgeous (fake) Save the Date shoot with a BM favourite photographer, Sarah Kathleen Photography, to celebrate.

Before you feast your eyes on this gorgeous shoot, we’ll leave you in the safe hands of the couple and their Zest It Up wedding planners, to tell you more about Lance and Laurie’s incredible love story, and their very unique wedding (fair!)…

Thanks to their partnering with other talented wedding professionals, brides and engaged couples can have a great night of dinner and dancing while getting the inside scoop on weddings in San Luis Obispo County.

Knot Crashers is a fabulous fake wedding where attendees get to feel like they are “crashing” for great ideas and seeing amazing wedding professionals strut their stuff!

Imagine the perfect date night that helps you save time in pulling all the details together for your own special day.

However, you cannot very well have even a fake wedding without a couple in love.

That is where the love story of Lance & Laurie comes into play. Having been married now for five years, they are very excited to be the very first Crash Couple!

The amazing photos from Sarah Kathleen Photography on the grounds of the divinely romantic Casitas Estate tell of their love and friendship beautifully with a touch of magic.

Coupled with their story below, it is obvious that even this “fake” wedding will be a sweet celebration of love!

In 2008, while Laurie was traveling the world with her brothers, Lance was recovering in an Army hospital from severe wounds received while fighting in Iraq.

During a visit home from recovery, Lance noticed a picture placed on his mom’s refrigerator of the most beautiful woman he had ever seen.

At the time, Lance was on a great deal of pain medication and maybe not completely in the clearest state of mind, so he took the picture and put it in his wallet.  He quickly said, “Mom, I am going to marry that woman!”

After being told to go lie down and stop acting crazy, Lance decided to return to his rehabilitation with an increased fervor.  He wanted to recover as quickly as possible and return home to San Luis Obispo, in order to meet Laurie before she started Cal Poly.

Lance did just that, recovering 7 months sooner than the doctors had predicted.

Lance and Laurie met in August of 2008, and quickly became boyfriend and girlfriend.

Unbeknownst to Lance, Laurie had been crushing on him as well through email updates of Lance’s time in the Army and recovery that his mom was sending out to family and friends.

Neither shared with each other that they had been crushing on the other and decided to play it cool. This was an especially good move for Lance, as Laurie would have probably written him off as a creeper immediately.

Well, hundreds of stories later, including a ‘meet the parents’ weekend that could rival Ben Stiller’s blockbuster, these two smitten love birds fell in love and were married on November 14, 2009 in Rancho Santa Fe, CA.

Currently, Laurie is an elementary school teacher and Lance is finishing up his GI Bill at Cal Poly where he helped open a Veterans Success Center and started a Student Veterans Organization on campus.

The couple is even more in love than ever and can be spotted from time to time riding their awesome Linus bikes down the Bob Jones Trail or soaking up Vitamin D at the beach.

Usually they spend what little free time they have together at home working on projects or cheering for their favorite team, the Chargers.

Such a sweet couple – what a perfect pair to feature as the stars of an epic show wedding?

And what a fun idea for a wedding fair – a night of dinner and dancing sounds so much better than wandering around an conference centre!

Thanks so much to Sarah Kathleen Photography, and the gorgeous Laurie and Lance for sharing their beautiful photo session with us. And for more information on Knot Crashers, check out their website.

Check out more unique ideas to Save The Date. 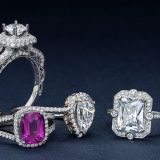 next up
Design Your Own Engagement Ring with Joseph Jewelry