All You Need To Know About Grooms Cakes

They're bright, they're garish, and they can sometimes be a bit of an eyesore on your carefully crafted pastel wedding palette.

But they are also fun, filled with chocolate, and one of the longest-running wedding traditions in the world.

(If you've missed the rest of our Grooms Week musings so far, catch up here.)

Cake by Artisan Cake Company, Photo by Hazelwood Photo via The Wedding Chicks

The tradition for a groom's cake might be seen as one spawned in the Southern states, but it in fact, dates back to Victorian Britain, and is still observed by the British royal family today. (Prince William had a Rich Tea chocolate biscuit cake, FYI!)

There used to be a small bride's cake too, to complete the trio.

Nowadays, grooms' cakes are seen as a nod to the main man at the wedding, in a day that's otherwise all about the bride.

While we're sure you guys appreciate the gesture, many modern couples plan their day together, with both of their choices reflected in every aspect of the wedding. That said, who are we to turn down cake?!

Grooms' cakes were traditionally a fruit or chocolate based bake, with a boozy element too (lots of our favourite things!) so for a modern take, a chocolate Guinness cake or brandy black forest would work beautifully.

As the Southern tradition for grooms' cakes has evolved, so too have the cakes themselves.

Search for grooms' cakes online, and you'll find all manner of odd shapes and novelty bakes, from sugar paste Lego men to icing crafted into baked hams – there's also quite a few dead ducks – hunting is a common theme, as are food and football.

Cake by Cakes By Chloe, Photo by Nancy Ray Photography via Wedding Chicks

Now while we love all things novel (and we've lots of inspiration for it below) we're also partial to the idea of something a little more classy, for stylish grooms who want their cake to be just as elegant as the rest of their day.

Your groom's cake can be an opportunity to feature a showstopping centrepiece to your dessert table, or to add a non-traditional cake into the mix.

A fig and chocolate naked bake, chic crepe stacks covered in salted caramel, hand-painted chalkboard tiers (like that fab one up top by Elizabeth Marek of Artisan Cake Company ) or perhaps a cheese wheel wedding cake for the groom who has more of a savoury tooth; all are masculine desserts, that would work perfectly as a groom's cake with a refined feel.

The groom's cake is often served at the rehearsal dinner or a next day BBQ (there's already a LOT of cake and dessert after your reception dinner) but can also be dished out to your guests during cocktail hour too.

There is a rehearsal dinner tradition to box up slices of the groom's cake up and gift it to your single female guests to sleep with under their pillows. Legend has it, they'll dream of their perfect man the night before the wedding.

Though I've a feeling your single friends wouldn't thank you for the gesture!

So, now that we're clued up on all the traditions, let's get on with the inspiration. From the oddball, to the opulent, check out these ideas for a groom's cake all of your own…

Cake by Nine Cakes, Photo by Karen Wise Photography via Style Me Pretty

Cake by Sea Island, Photo by Ashley Seawell Photography via Style Me Pretty

Cake by Barb’s Cakes, Photo by A Bryan Photo via Southern Weddings

For The Banjo Boy

Cake by Cup a Dee Cakes, Photo by Tim Will Photo via Southern Weddings

Cake, Perfect Wedding Cake, Photo by Our Labor of Love via Southern Weddings

Cake by Cake It via Cakes Decor

Cake by The Cupcake Theory, Photo by Marlon Capuyan via Burnett's Boards

So many sweet ideas, from the eccentric, to the elegant. Which one's your favourite?

Do share if you've seen any amazing ideas for grooms' cakes, we'd love to hear about them.

Check out the rest of our Grooms' Week Musings here. 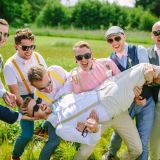 next up
10 Ways To Be The Best Best Man, Ever

10 Ways To Have The Most Romantic Wedding Ever!