I ‘ve always found ceremonies and traditions from other cultures absolutely fascinating ~ especially when it comes to wedding celebrations!

So I am delighted to share Funmi & Adrian’s Nigerian {Yoruba} engagement ceremony photos. They are the talented and oh so lovely husband and wife team behind FO Photography. Remember their sweet surprise anniversary shoot I shared last week?!

Fumi kindly shares all the special Nigerian traditions & events of their engagement ceremony:

It’s a full house in the Omotade residence as early as two nights before our traditional engagement ceremony – the most important wedding ritual to we Yoruba people. By 6am on the “D‐Day” as most of my family like to call it, I was already getting my make up done by talented Buki Mapaderun‐Williams (BMW for those with a good sense of humor). The entire house was up and everyone was busy getting dolled up in their custom‐made aso‐ebi (traditional family uniform).

Of course, you can imagine I had at least eight female cousins and sisters doting on me, watching intently while Elleleroske tied my gele (traditional head‐tie)…two hours passed before Adrian, already dressed in his aagbada came to take a sneak peek of me (Yoruba weddings, unlike Western weddings, are not big on ‘hiding your dress’ before the ceremony).

Upon arriving at the engagement venue, we noticed the hall was already teeming with guests. Thank goodness we set it on a Thursday or we would have had an overflow of people. Yes. Engagement is a family affair meaning one invitation will
probably yield an average of 3‐5 guests!

According to the marriage customs, Adrian, alongside those representing his family (who couldn’t attend) danced into the hall first. I did not witness this portion as I was waiting to be called upon; however, my cousins who saw Adrian marveled at how rhythmic and traditional his dance moves were. What caught everyone’s attention the most and caused an “ahhhhhh” from the crowd was Adrian’s prostrating (lying face down in greeting) for my family in the customary Yoruba way of greeting. He probably scored about 1013 angel points with my family just doing that.

Following some ceremonial acts such as a formal introduction of the groom and his family representatives, it was now time for me to dance in to meet the groom. This is a fun part of the ceremony as all my maidens – consisting of all female relatives (and that’s a lot of people) dance in vigorously and fervently with me. At this point, each female is trying to show off her dancing skills and support for the bride. It’s a sight to see! One of my aunties was so eager to make a difference so much so she decided to adjust my already perfect gele but ended up messing it up! I was furious! I had to feign and suppress my anger since I was expected to be the happy, smiling bride.

Now, that was work. Thanks to Elleleroske, I got my gele adjusted as soon as I was settled. After about 7 minutes of dancing a short distance of 100ft to the stage where Adrian, the gifts he brought, our families seated facing each other on opposite sides, sat displayed in a rather beautiful way.

Thanks so much to Funmi and Adrian for sharing their wonderful, traditional Nigerian engagement ~ there’s even more dancing to come in Part 2!

{In the meantime, why not check out their photography blog FO Photography to see some of their recent work.} 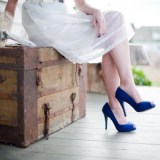 next up
A Quirky, Vintage, $30 Wedding Dress Inspiration Shoot

10 Reasons Why Being Newly Engaged is Awesome