Lots of couples dream of honeymoons that cross something off their bucket list, involve a streak of adventure or take them to a romantic city.

But most couples, just want to sleep!

After all the stress, excitement and busyness of planning a wedding, sometimes even the most active couples just want nothing more than to flake out on the beach with the occasional effort of sipping a cocktail, taking a dip, and maybe even indulging in some watersports or excursions (at a push!).

You might remember a few months ago I went honeymoon testing in the Caribbean and while I'd thought a beach honeymoon wasn't for me, I was thoroughly converted.

Not only did I come back utterly unwound (the effects of which have still lasted!) but there's something so romantic and intimate about a week or two of solid beach bumming.

Whether you're lapping luxury in a private island resort, or hanging out in hammocks by a beach bungalow for two, what could be a better start to married life than indulging in lazy days, long naps, and stunning sunsets?

But hey, I don't need to convince you!

The only thing is once you've set your heart on a trip to the seaside, how do you know where to go for a beach honeymoon, you'll never forget?

From the edges of Australia to the shores of California, the world is dotted with glorious beaches, paradise islands, and gorgeous resorts each one as enticing as the rest (especially on a rainy day in London!).

So, to help you decide, we've combed the coasts to find you eight of the most beautiful beach destinations on the planet.

Get set for serious hammock envy…

Where to Go: While the mainland is worth a few days of your trip, make a break for it and find your own patch of paradise.

Many resorts have their own islands, so it may be easier to start there, though the Yasawa and Mamanuca island groups are among the most popular and accessible.

Where to Stay: The resorts in Fiji tend to be of a really high-standard, though opt for something a little more boutique for added romance and privacy.

When to Visit: With year-round sunshine, Fiji is good to visit at any time, rainy season lasts from late December to mid-March, but the showers never last too long.

Cuba might be more synonymous with old cars and big cigars but with a prime spot in the Caribbean between the Florida Keys, Jamaica and Mexico, it boasts some of the best beaches on the world.

Pair with a few days in Havana for honeymoon that has the best of both, and with a current normalising of relations with the US, now is most definitely the time to go.

Where to Go: While Varadero is the most popular seaside region for its leggy strips of beach, hit the Cayos for something a little more unique. Cayo Coco, Cayo Santa Maria, and Cayo Largo del Sur are the more developed. And for diving or snorkelling, head to Guardalavaca.

Where to Stay: Boutique hotels are thin on the ground in Cuba, but there are plenty of honeymoon-worthy resorts.

When to Visit: November to May is the best time to go, but the humid summer months are still fine as long as you find a shady spot and a cold drink. September and October are the wettest months of hurricane season.

When you think of a honeymoon in India, epic train-journeys, frantic cities and blissful Taj Mahal sunsets come to mind, but with of 7,500 kilometres of coastline, the sub-continent packs a serious punch with its beaches too.

Where to Go: Goa is probably the most iconic beach region in India and with good reason, but for something with a little more mystique, look to Karnataka or Kerala.

Or for something really away from it all, the Andaman Islands is a lesser-visited paradise off the Burmese coast.

Where to Stay: India has some of the most stunning resorts and blissed out boutique hotels on the planet.

Check out Swasara for honeymoon yoga, Taj Exotica for pure pampering, or Barefoot at Havelock Island for the ultimate secret escape.

When to Visit: December to March are the best times to visit,  avoid monsoon season from May to October.

Tahiti, Bora Bora; just a mention of these legendary island escapes and we can already see ourselves propped on a beach lounger, tropical cocktail in hand.

French Polynesia offers the most breathtaking lagoons, the most beautiful coral, and of course, some of the most remote relaxation in the world. If you want to take it slow (really slow!) on your honeymoon, this is the place to do it.

Where to Go: Of course Tahiti and Bora Bora are the big hitters but Moorea and Le Taha'a also draw honeymooners with their piercing blue waters and lush green retreats.

Where to Stay: Take your pick from some of the world's most stunning resorts, but really in a place this beautiful, a beach hut would suffice!

When to Visit: April to October is the best time to go for calm waters and balmy days.

Belize is a no-brainer when it comes to a beach honeymoon, with a stunning Caribbean coastline and infinite paradise islands speckling the waters off-shore.

A prime honeymoon destination for couples looking to avoid lofty resorts, Belize has it all, great diving, charming locals, abundant seafood, and while some spots can be lively, a pristine and private stretch of sugary white sand is never too far away either.

Where to Go: Belize's largest island, Ambergris Caye is where a lot of the action is with diving, bars and excursions.

Where to Stay: For a chic boutique stay, check out Victoria House on Ambergris Caye, unpretentious luxury can be found at the stunning Turtle Inn in Placencia, and Cayo Espanto is sheer private perfection.

Belize has some great budget beach huts on AirBnB too, for couples looking to save on accommodation.

When to Visit: Between December and April is the best time to travel, to skip the heaviest rains, avoid September to November.

All photos via Mr & Mrs Smith

The Caribbean and the South Pacific might seem more exotic and tropical, but from the mainland, to the islands, Greece sure pulls its weight when it comes to pristine beaches, glistening waters and breathtaking views.

If you want a beach honeymoon that comes with idyllic villages, amazing cuisine, and a touch of European culture, Greece's beaches are a pretty glorious backdrop.

Where to Go: Santorini is the big star when it comes to a beach honeymoon in Greece, (and it's obvious why!) but other places to check out are Halkidiki, the Peloponnese, Mykonos, Spetses, Poros, Kefalonia and Ithaca.

Where to Stay: Look to Amanzoe for the epitome of luxury in the Peloponnese, Gold Suites, The Tsitouras Collection or Sun Rocks for sophistication in Santorini, or Ekies All Senses Resort in Halkidiki and Perantzada Hotel in Ithaca are both charming seaside stays.

When to Visit: Greece's summer season is at its peak from May to August – while it's still balmy in September, many resorts will close up, so check before you travel.

A collection of Robinson Crusoe-worthy islands (and a couple of bigger ones too) in the Indian Ocean, Seychelles is more than just another paradise destination.

Along with those palm-lined beaches, turquoise waters and spectacular marine life, is also a bustling Creole culture with a mix of influences from France, Britain, Africa and Asia.

Where to Go: Mahé is the main island in the Seychelles, and where you'll most likely travel to first, after that, the smaller islands are your oyster with stunning hotels on Praslin, Silhouette Island, Desroches, and La Digue and a fleet of small and private island resorts too.

Where to Stay: With a long-established tourism industry, the resorts in the Seychelles are of really high standard.

When to Visit: With one of the longest high seasons in the tropics, April to November is the best times to visit.

Entirely different from many of the islands around it, St. Lucia has the distinct volcanic peaks, tropical waterfalls and lush rainforests you'd associate more with Hawaii, but with the calm waters, friendly vibes and pristine bays of the Caribbean.

Perhaps the most romantic setting in the Caribbean for a beach honeymoon.

Where to Go: At 27 miles long and 14 miles wide, you're never far from the action in St. Lucia, though the bulk of the resorts sit in view of the iconic Pitons (those two peaks) around Soufriere Bay, while Choc Bay and Rodney Bay are also popular.

The Atlantic side of the island to the east is a lot choppier, so stick to the west for calmer seas.

Where to Stay: St Lucia stands out for its selection of boutique hotels and luxury eco resorts, but there are also some fantastic bigger all-inclusive resorts too.

When to Visit: St Lucia is great to visit all year around, though the climate in January to April is particularly perfect.

Wow, aren't they just epic? It was hard enough to narrow it down to eight, now I'm so torn on which one of those to choose!

Which one would you pick for your own paradise island escape? Or have you been to another blissed out beach? We've love to hear your recommendations in the comments below!

Oh and before you pack, stay tuned for our guide on gorgeous honeymoon-worthy bikinis later today. 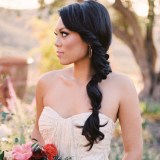