Because it’s not a real wedding, and it’s not really a styled shoot. It’s a Edit & Lajos’ gorgeous anniversary shoot to celebrate their 38 years as husband and wife.

We make such a big fuss of couples getting married, but really it’s the ones that go the distance that should be celebrated, right?

So we’re so glad to share this chic, unique, utterly stylish shoot by Bell Studio, in Budapest, Hungary.

We love that Edit chose to rock daring, modern bridal style for her anniversary shoot, with two bespoke creations by designer Makány Márta.

The backdrop for their photo session combined vintage decor, an elegant afternoon tea, and stunning floral displays from their friend and host, Viola Violetta.

Bold and fun, yet sweet and romantic, we’ll pass you over to the team behind the shoot to tell you more about this very special couple, and their love story.

(P.S. Make sure you scroll to the bottom to check out their original wedding snap!)

Edit and Lajos are celebrating their 38th anniversary.

Lajos is an engineer, Edit is a teacher, both of them are retired now and have two children, one living in Paris, the other in Dusseldorf.

Edit and Lajos feel they are the luckiest people in the world, because after falling in love at first sight almost 40 years ago, they still love each other.

Edit’s life totally changed when she started her modelling career a few years ago. She was chosen by a famous Hungarian hairdresser as his model for the Alternative Hair Show London. And this is not the end of the story.

She was picked by an English hair artist and was taken to LA to work for him. These new experiences made her become more creative, self-confident and experimental.

She and Lajos decided to celebrate their wedding anniversary in an extraordinary way. They asked Hungarian fashion designer Makány Márta to make a dress that fits Edit’s open-minded personality and makes her look more fabulous than ever.

Edit chose a mermaid dress because she had never tried anything like this before. Lajos had a black suit with white shirt to keep it simple.

One of the couple’s friends owns a vintage style flower showroom and she was willing to provide them the shop for the photoshoot. The main colours of the decoration were ecru and yellow because these are Edit’s favourite.

Both of them wanted something modern still traditional. They decided to use some china and silver cutlery inherited from the family.

The second dress was even more extraordinary than the first one, it beautifully fitted Edit’s unique look. The yellow flower bouquet was also made by the flower shop owner, Viola Violetta.

No one from the family knew they were having a photoshoot, it was a surprise for them. The only one participating in it was their lovely dog, Vackor, who was taken from a dog shelter years ago.

He didn’t really understand what was going on but felt he had an important role.

Pretty awesome right! What a wonderful couple, and I just love that they kept the shoot as a surprise for their family!

As we said last year, we’re really eager to see more diversity in the couples whose weddings we share on the blog, and while that covers race, religion, gender, and size, it applies to age too. So as you can imagine, we’re just delighted to show you that you don’t have to be in your twenties or thirties to look, and feel, amazing in a wedding dress or tux.

Thanks so much to Bell Studio, Makány Márta, and of course, Edit & Lajos for sharing their anniversary shoot with us – here’s to many more years of wedded bliss! 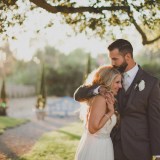 next up
Gorgeous Backyard Wedding in California (With Tacos & Churros!)