As an Irish person, living in London, my vision of Independence Day is mostly influenced by TV, movies, and Taylor Swift’s Instagram. But any day that’s filled with pies, BBQs, sunshine and fireworks, sounds like a pretty swell one to me.

It also sounds like the perfect day for a wedding.

Which is why we’re all about today’s cool 4th of July shoot by the wonderful Gina Paulson Photography.

We’ve mentioned before, but there’s something just so entirely cool about Americana style, whether you’re Stateside or here in Europe, the timeless stars and stripes always look fresh, fun, and celebratory.

Add in some cute bakes, a big red barn, dreamy florals and bright stationery, and you have yourself the makings of one very stylish party.

Scroll down to get inspiration for your own Americana wedding, but first up, Gina Paulson shares the story behind this romantic 4th of July shoot.

This time of year, celebrating America and its roots just comes so natural to most of us.

Kari and Monte, shown in this shoot, are a REAL couple who have been married for 18 years and own a small farm in Washington state.

They’ve held onto such a rich American tradition with their rustic lifestyle and I felt so inspired to capture it as beautifully as possible while also keeping it fairly simple holding true to their style.

It was heavily influenced by American traditions so naturally we stuck with a red, white and blue theme. We incorporated small details like a local hand baked cherry pie, airmail design elements, blueberries as a floral element, blue antique dinnerware, and vintage flags.

One of my favorite memories from the shoot was as we were shooting I saw these large horses slowly start creeping into the frame and for me, that isn’t normal. But Kari and Monte just turned around and started petting them, so simple and natural and beautiful.

I hope you enjoy the simple and raw details from this shoot as much as I did.

Isn’t it cool? Kari and Monte sound like a pretty special couple. I love the retro feel of it all, and it would work a wedding at any time of year, don’t you think? Also, that bouquet – so gorgeous!

Thanks so much for Gina Paulson Photography for sharing her inspired Americana wedding with us.

Get more ideas for a 4th of July Wedding. 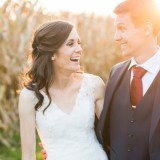 Playful Pink & Blue Wedding With A Bride In Glittery TOMS