Gemma is our first ever real bride diary contributor* on Bridal Musings and I couldn’t be more excited about this new feature!

Gemma will be stopping by regularly to share her musings on all those wedding related decisions, plans and issues I know lots of you are going through right now.

(It’s ok, we’re here to hold your hand. As much as I loved wedding planning there’s no denying it’s bloomin’ hard work.)

Gemma and her beau, Tom, are having a rustic barn wedding in the Hampshire countryside this coming June, so there’s not long to go but we’ll be supporting her (and you) every step of the way!

Glasses of champagne consumed: about 100 and counting

My name is Gemma and I am a wedding stationery designer and bride to be. Last June Tom popped the question, and now it’s only 3 months and 26 days until the big day. Whoop!

So let me take you back to the beginning…the proposal – aka Best.Day.Ever.

It was our three year anniversary and Tom had asked me to book some time off work. He always manages to plan something amazingly lovely for any special occasion we have (last birthday we stayed in a 18th century gypsy caravan), so I didn’t think there was anything particularly suspicious about this. Even though it was the middle of June I remember the weather was awful, and it seemed to be bothering Tom quite a bit, which was strange because he is usually the most chilled out person on the planet. At that point though, we were cocooned in our favourite French cafe, so I was more interested in my almost croissant and the joy of having a rare day off.

After breakfast Tom suggested we go home and relax for a bit – I was even allowed to paint my nails which again was slightly unusual. At this point, however, I was wondering whether I should in fact have booked that yurt holiday since it appeared we had no plans. I later learned that he was stalling for time whilst one of our close friends jumped in a taxi with the hamper full of goodies and champagne he’d bought the night before, nestled it in the boat he’d hired for the afternoon, and made a quick disappearance before we arrived at said boat.

So anyway, under the pretence of going for a ‘pub lunch’ , I found myself boarding our own little motor boat and sailing off up the river with a hamper full of Champagne and delicious treats. I was having a lovely little time noshing my prawns in scallop shells and when we arrived in Teddington and moored up (I might point out that this was pretty much the place where we met 3 years previously).

Tom popped open some champagne and proceeded to give me a beautifully wrapped present…at this point however, any ideas I might have had about his intentions vanished as this box was clearly not ring shaped. I was about to rip open the paper, with not an inkling that this would be anything remotely sparkly, when Tom said that first he wanted to ask my something. That was the moment he got down on one knee, in the middle of the boat, and asked me to be his wife (squeeeeeeal!!). I am very rarely speechless, but I actually don’t remember what I said (not ‘yes’ apparently as I was crying too much). The ring was my grandmothers engagement ring which he’d had re-set and made to fit me perfectly…which made me cry some more.

When I’d finally stopped sobbing I opened the present he’d given me to begin with, which was a hand made book full of blank pages and, on the first page, a vintage postcard of Nice. It turned out we were flying to Nice the next day for 5 days in the sun to soak up being newly engaged (in the early days ‘Nice’ was our silly code word for ‘marriage’…as in ‘when we go to Nice, well probably have the reception in a barn’). It was so lovely to have some time together to just revel in being engaged, stare at my ring far too much and generally have an excuse to drink champagne for breakfast every day. Absolute bliss!

So here I am now, 8 months down the line and ridiculously over-the-moon excited about the prospect of marrying my best friend this June!

Why not leave Gemma and Tom a little love in the comments below, I know they’d be thrilled to hear from you.

Plus I think Tom deserves a round of applause for not only picking the perfect ring but arranging a ‘newly engaged’ honeymoon too!

Plus I owe you guys a mammoth post featuring the latest proposal stories from all you gorgeous Bridal Musings readers. It’s coming very soon, pinky promise!

*You can find out more about Gemma and her beautiful stationery, calligraphy and illustrations in this post. 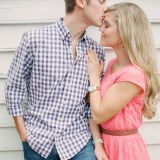 next up
Sweet Southern Engagement Shoot On Campus